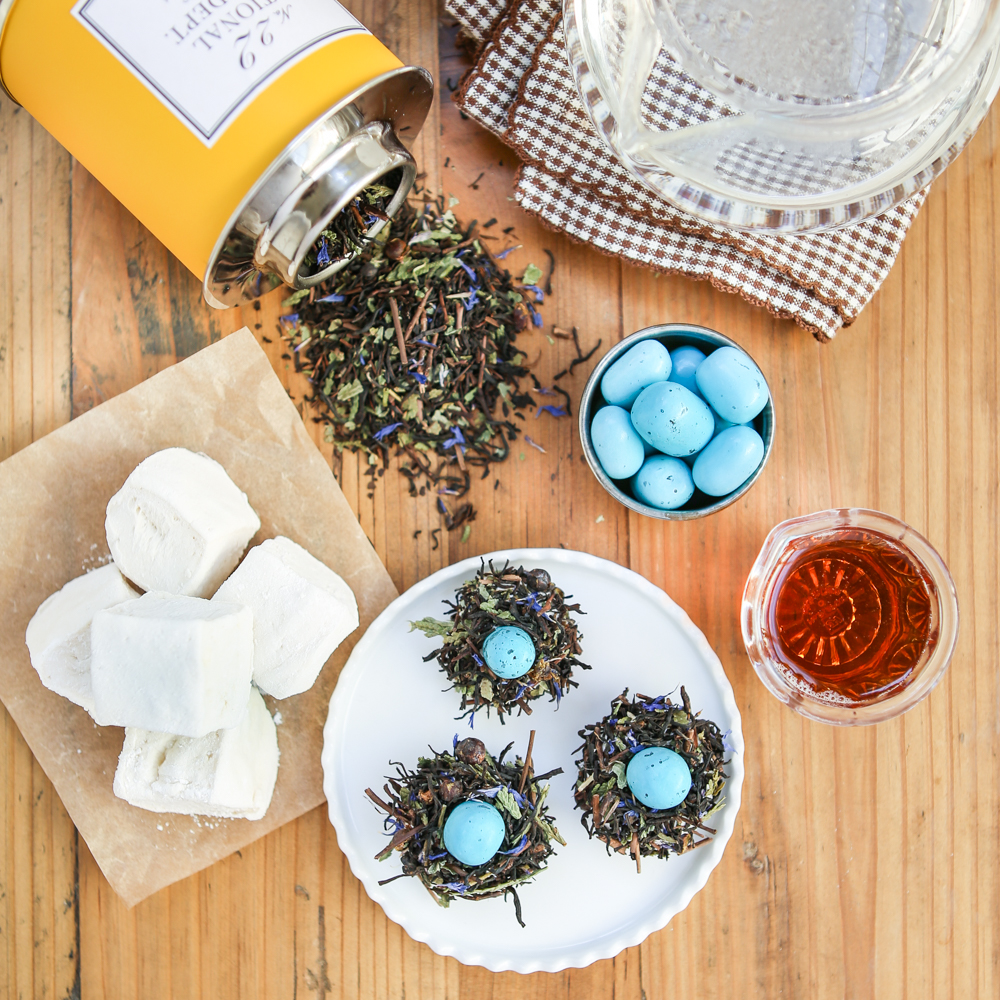 A few days ago, outside my living room window, I noticed a bird tucking in and out of the crevice between the misaligned wooden fence panels surrounding our house. The bird seemed busy at work–occupied. Amidst its constant activity, it managed to shoot me an occasional glare, so as to say back off lady, or you’ll regret it! It wasn’t until I saw the same bird again two days later that I realized what it was up to. Just in time to mark the beginning of spring, my feathery friend was building a nest. 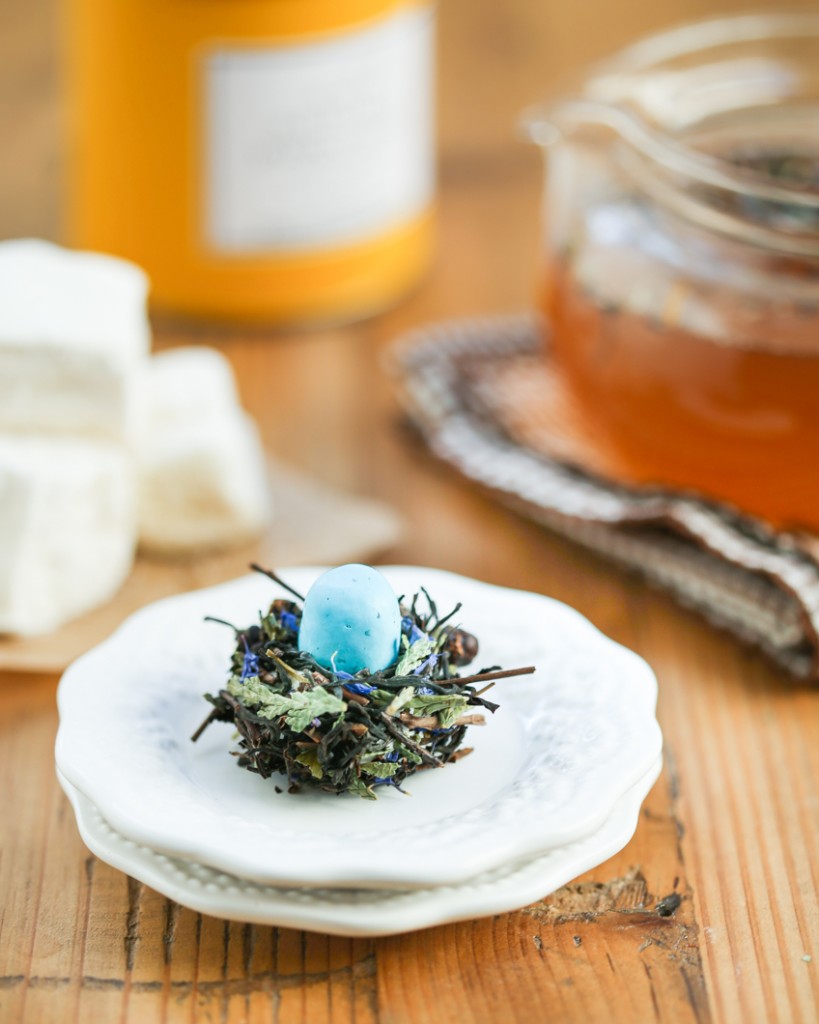 I get it, birdie. There’s a lot of work that goes into nest-making. As I learned a few days ago making these Bird’s Nest Tea Bombs, making a sturdy nest is a labor of love…an art form, really. My tea nests are made from maple syrup marshmallows covered in tea leaves. Although they look like you’ve just spotted them in a thick woodland forest, they serve an entirely different purpose. They’re designed to be an all-in-one tea brew, sweetener, and treat. 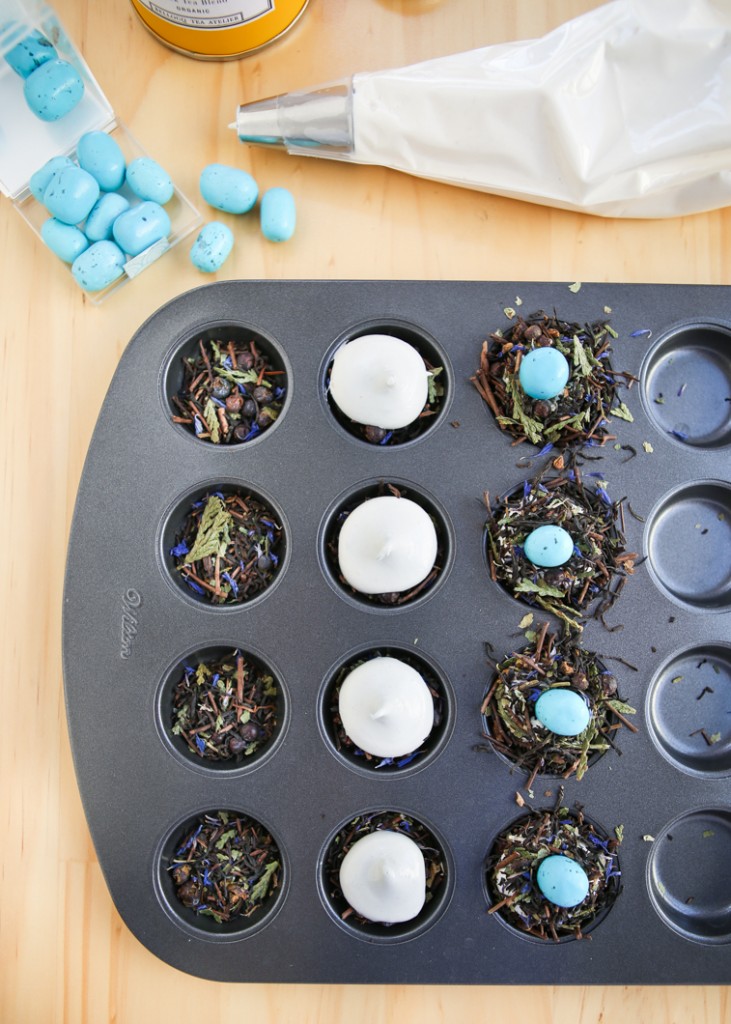 This project for Bird’s Nest Tea Bombs was inspired by 2 things: my sister and some very beautiful tea. On last week’s Tea of the Week post, I featured Bellocq Tea Atelier’s No. 22 National Parks Dept. This nature-inspired blend of Darjeeling and Assam has bright green cedar tips and twiggy kukicha (twig tea) thrown in. It’s so perfectly organic and rustic that I still can’t get over how delicious it is. 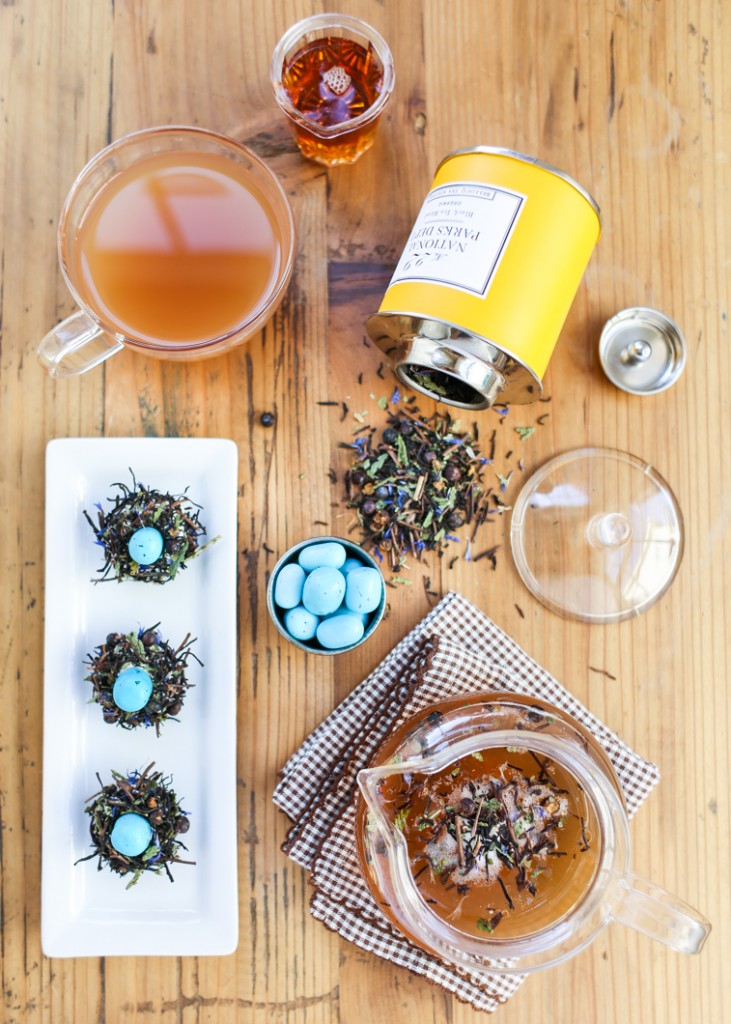 As an Easter gift (and because she’s a cool gal with great taste), my sister Melissa sent me some dark chocolate blue robin candy eggs from a fantastically elegant candy shop in Beverly Hills called Sugarfina. These delightful candies and a tin of gorgeous tea married to make this whimsical confectionary DIY. Here, a small blob of marshmallow holds about 2 teaspoons of loose tea together, just the right amount for small teapot brew. Although you can use any marshmallow recipe to make these, I like to use a maple syrup base because it enhances the natural, mild sweetness of my steep. You can even make the marshmallows separately to snack on. 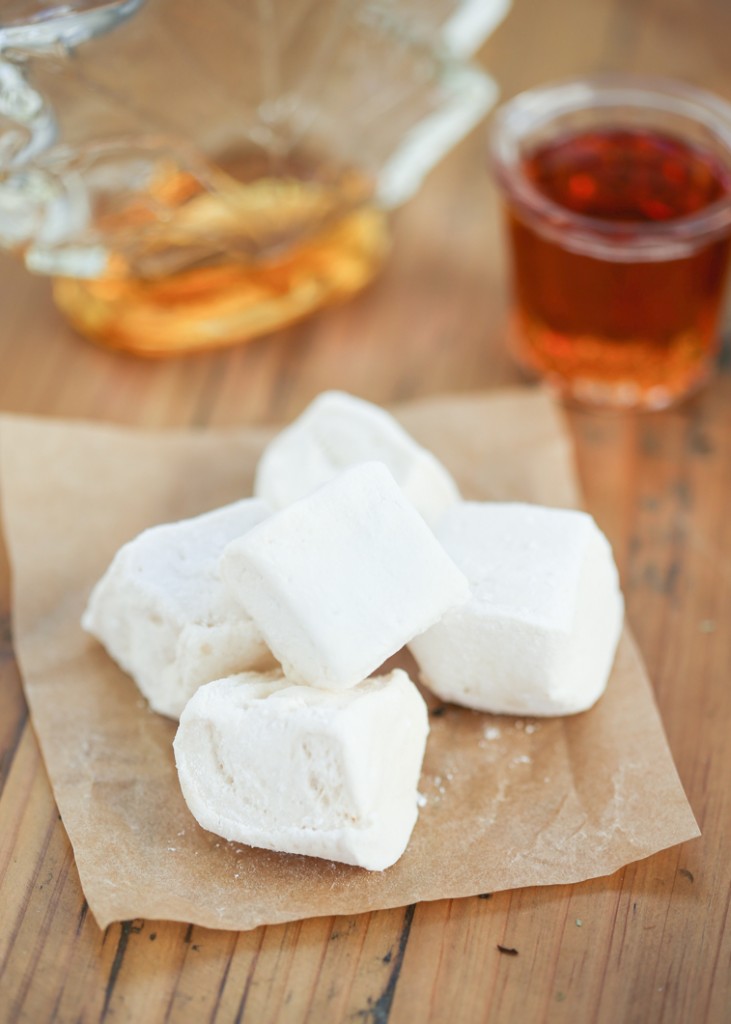 More than anything, these tea marshmallows are ornamental, so don’t expect a lot of sweetness when they dissolve in your brew. Use any twig or flower based tea to make these Bird’s Nest Tea Bombs–a mix with colorful visual interest is ideal. Above all, just remember to enjoy the candy eggs before dropping the nests into the hot water. Happy springtime brewing my friends! 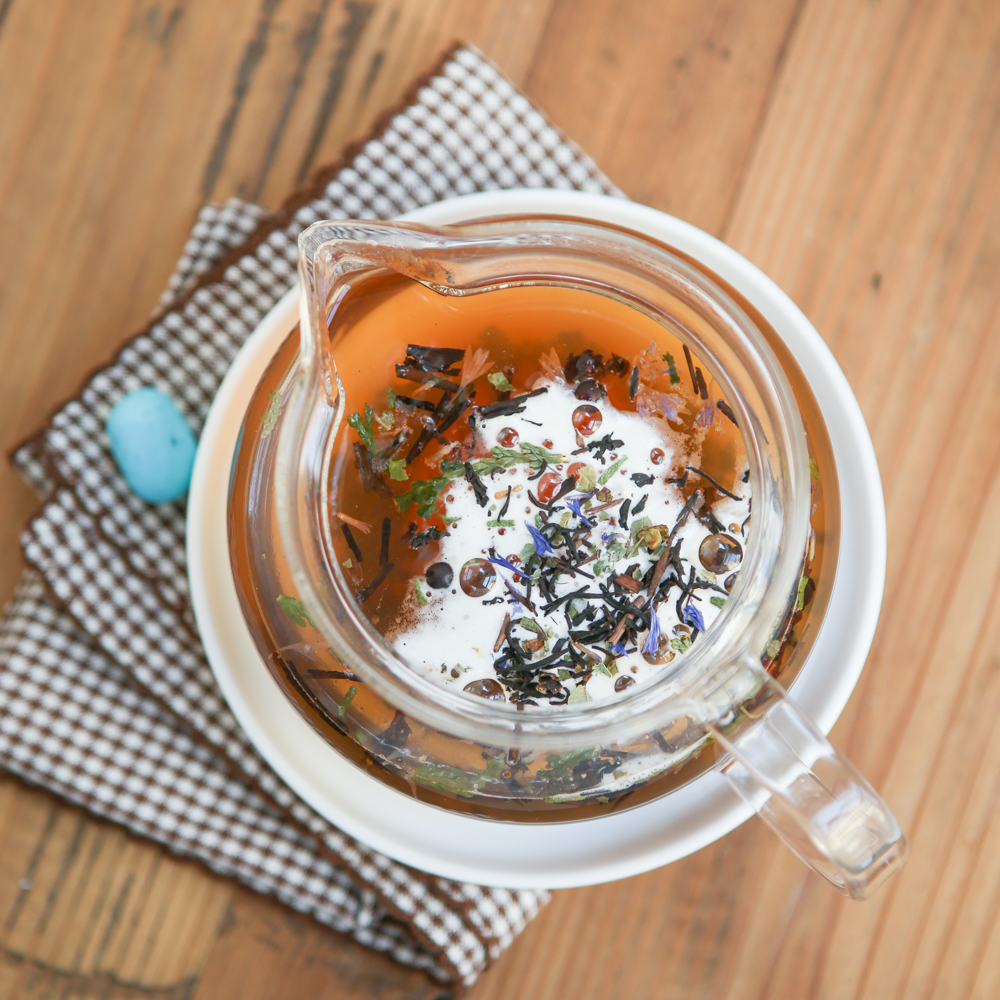 1.)  In a large heat proof mixing bowl, bloom the gelatin in the water. Set aside.

2.)  Place the maple syrup and cream of tartar in a medium pot, mix with the wooden spoon, then place on low-medium heat until the mixture hits 250 degrees F. Use the candy thermometer and be careful to watch the mixture so that the syrup doesn’t boil over.

4.)  When the maple syrup comes up to temperature, take it off the heat then gradually pour it into the bloomed gelatin. Use a hand-held mixer to whip the mixture until you get stiff peaks. Use an oiled spatula to transfer the marshmallow fluff to a large piping bag with a 1/2″ open tip for piping.

5.)  Pipe small dollops of marshmallow fluff into each tea-filled mini muffin pan cavity. Attach a candy egg in the middle of each dollop, then top the marshmallows with extra loose leaf tea to create finished nests. Each nest is enough to brew 1 small teapot of tea (2 cup capacity). Simply eat the egg candy, then throw the nest into hot water to brew. 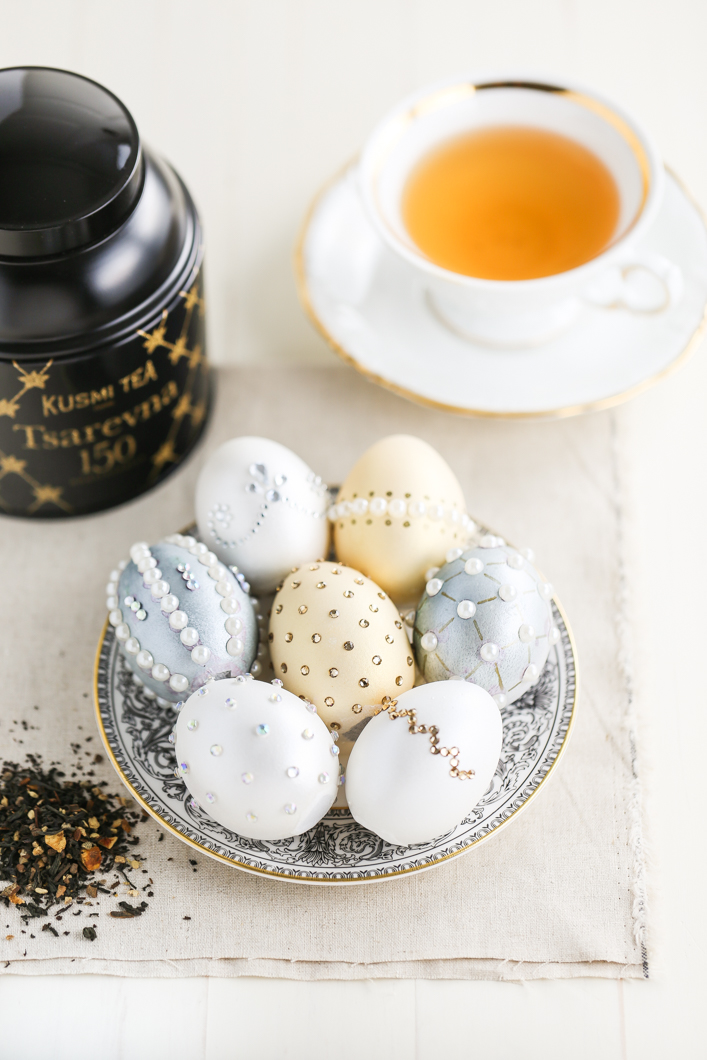 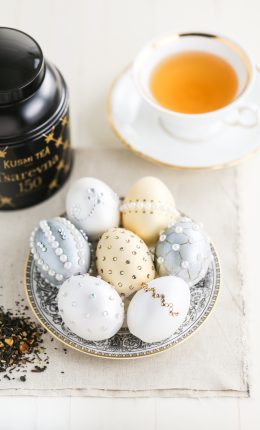 Over Christmas, I discovered the most opulent tin of tea made by the French brand, Kusmi. Tsarevna, created to celebrate the company’s 150th anniversary, is a limited edition tea gilded in gold and black, truly a show stopper. Years ago, I visited St. Petersburg, a majestic city rich in culture and history. Learning about the Romanovs left a... MORE >> 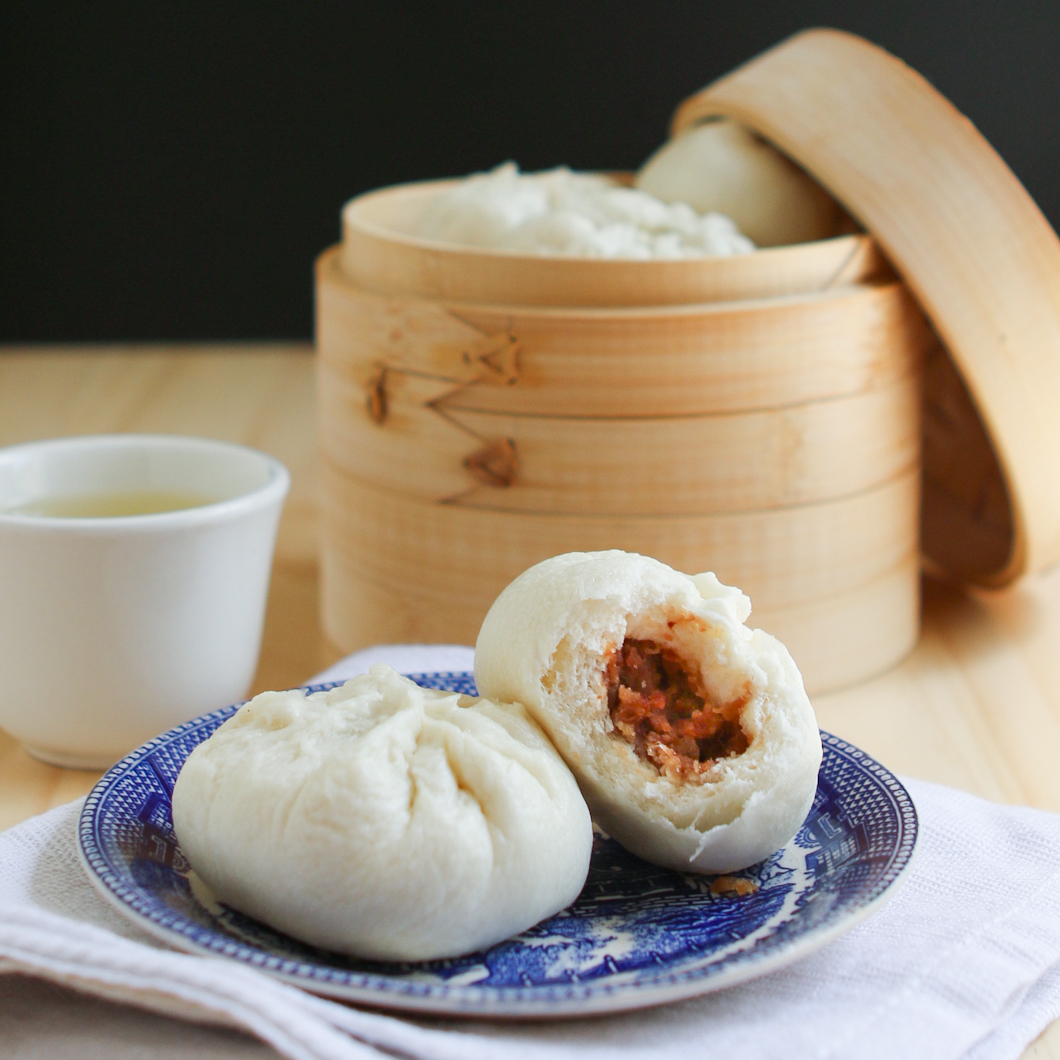 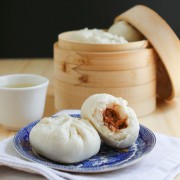 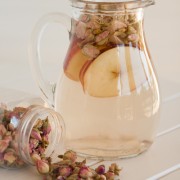 I gave up drinking diet sodas earlier this year,... MORE >>