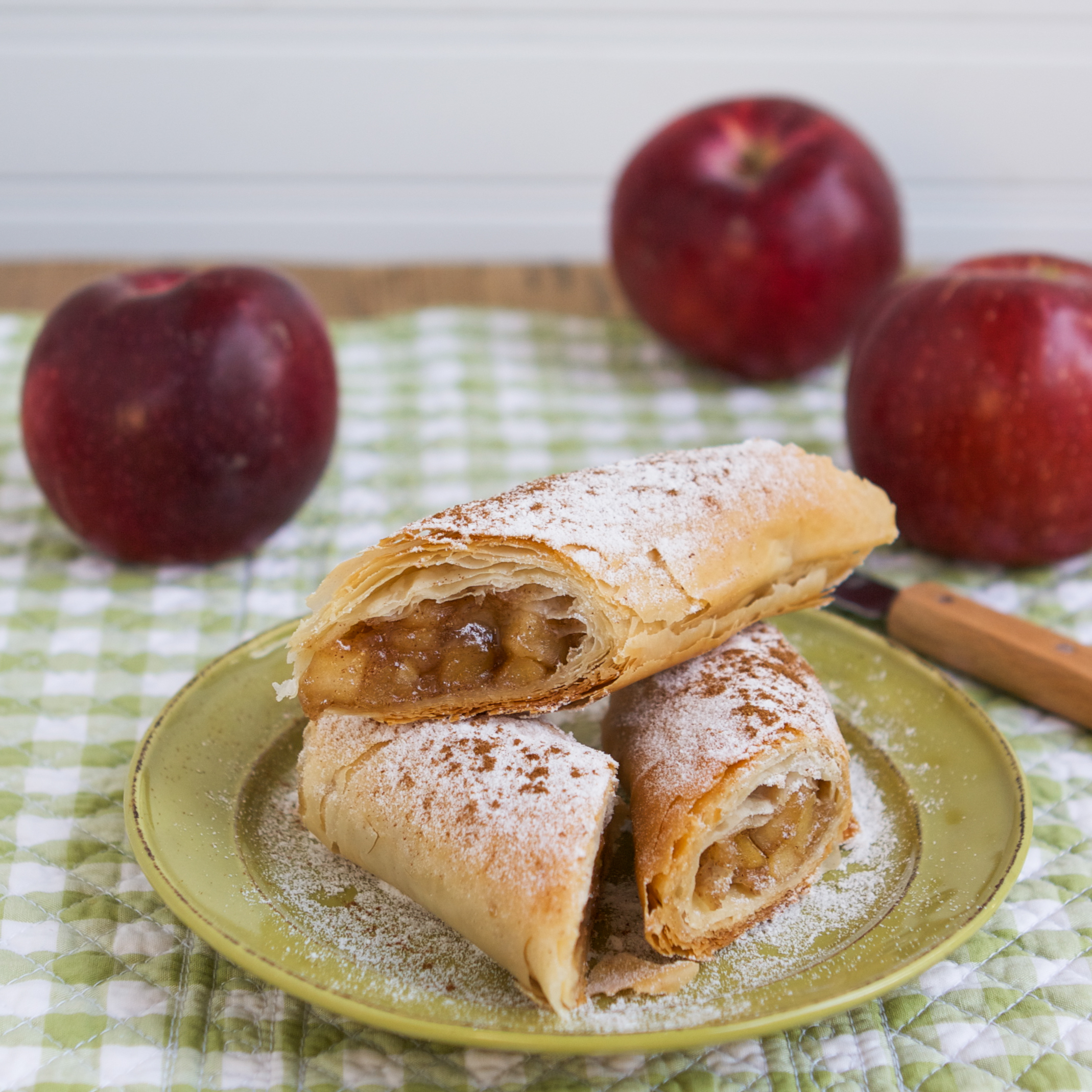 Crisp Apple Strudels…one my favorite things on a cool autumn day.  Well, at least they should be.  Problem is, a good apple strudel is hard to find.  The last time I had some was when my hubby and I passed through Solvang two years ago, and even then it tasted more like an apple pie than a strudel.  As Julie Andrews reminds us in The Sound of Music, a strudel should be distinctively light and crisp, not rich and dense like an apple pie is. 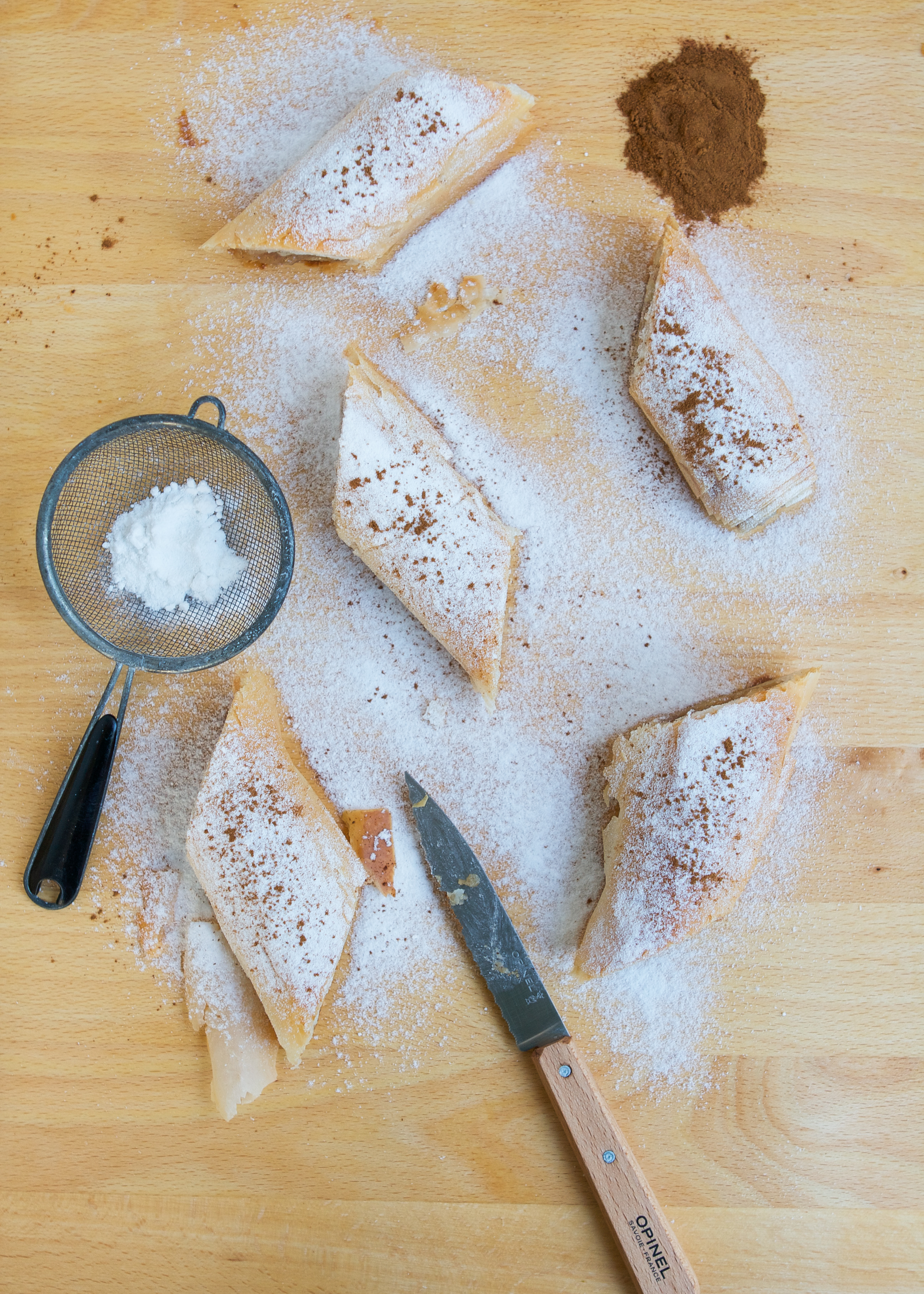 Searching for some good apples that would make a strudel worth making, I made a trip out to Tehachapi this past weekend.  A small city north of Los Angeles, Tehachapi is known for its abundance of apple orchards.  All along Highline Road in Tehachapi there are orchards that harvest a large variety of apples in late September through early October every year. Since Tehachapi is a bit far out from Los Angeles, it’s common for Tehachapi orchard growers to bring their beautiful apples to sell at farmers markets all over LA, including Pasadena and Santa Monica. 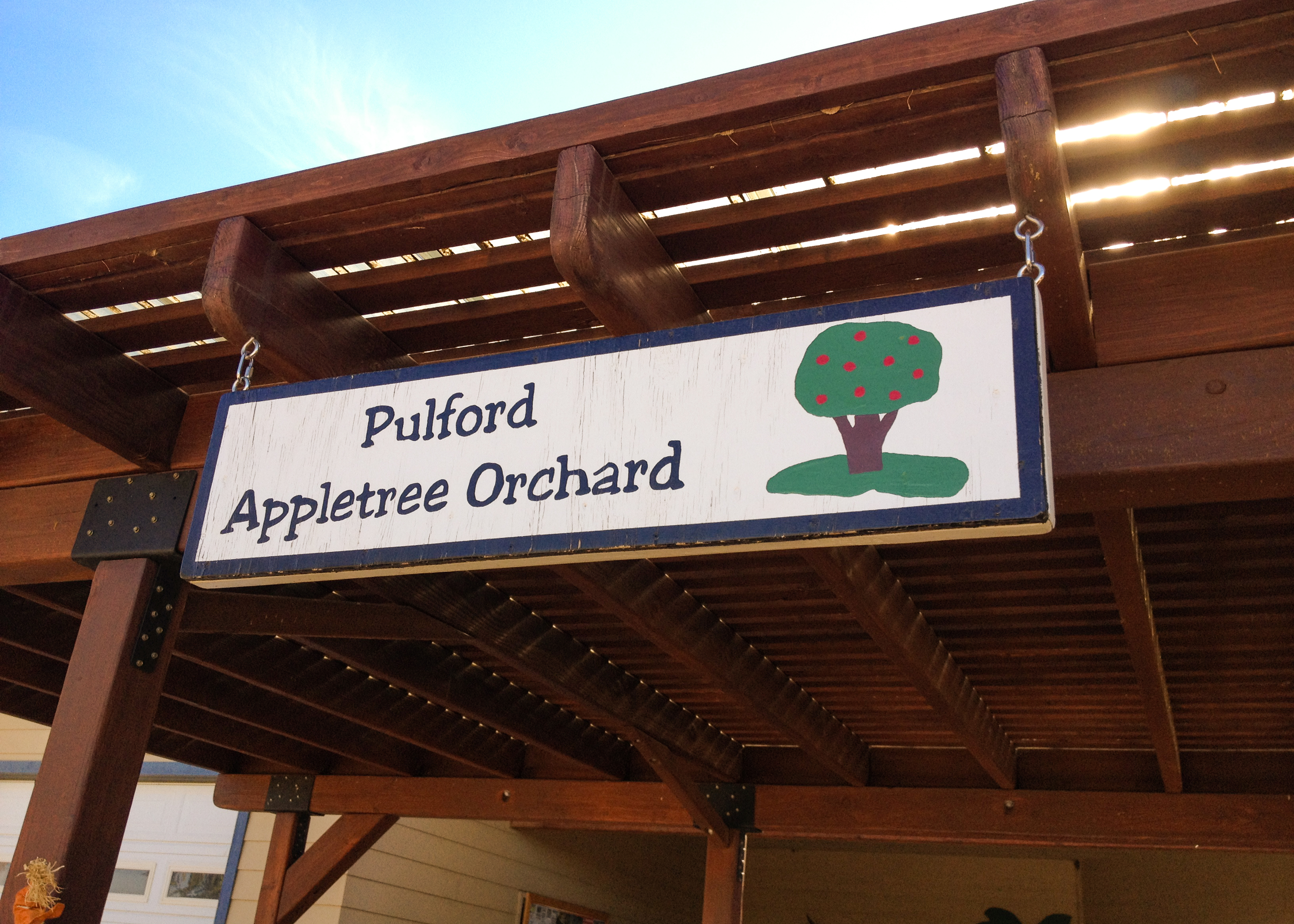 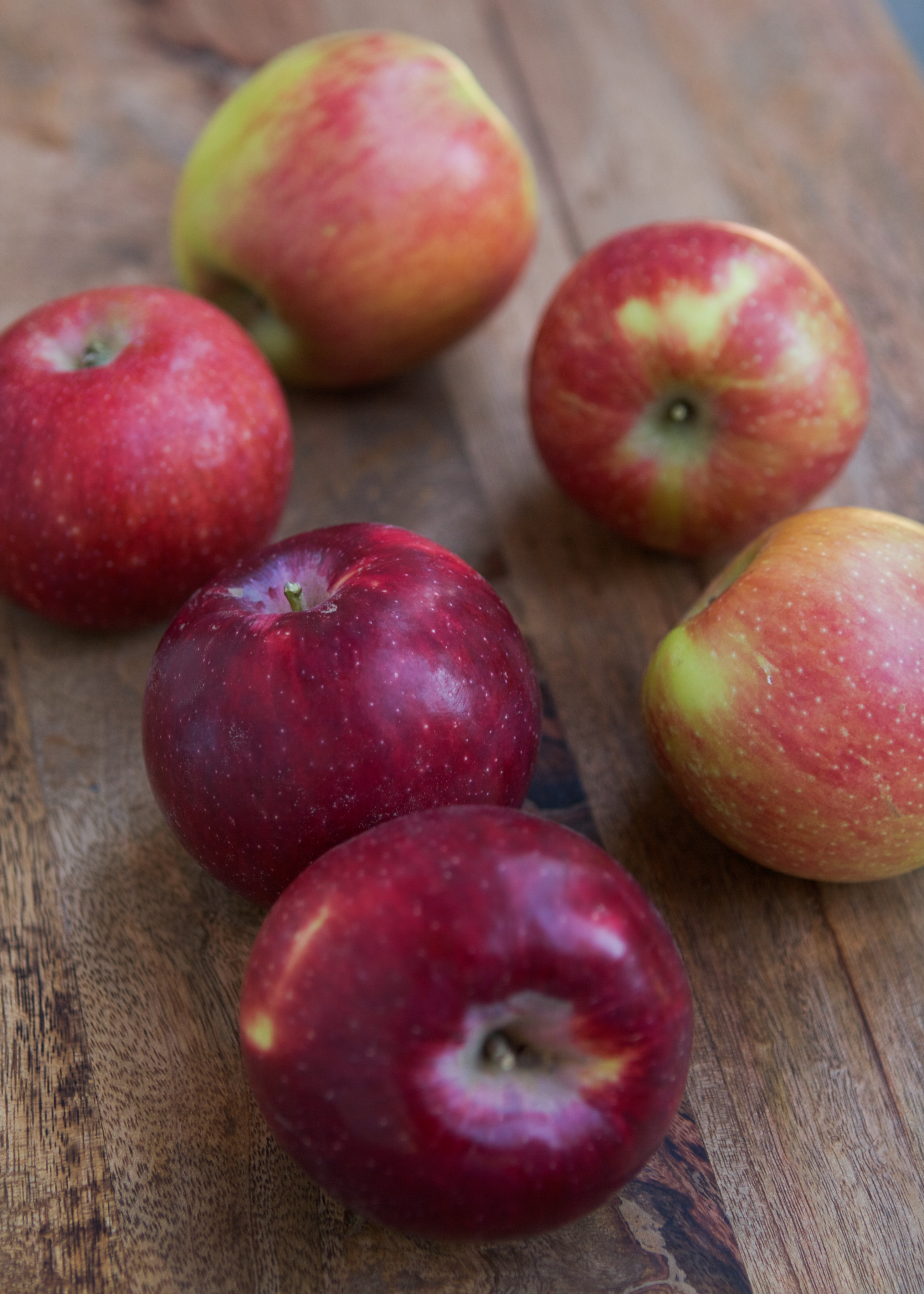 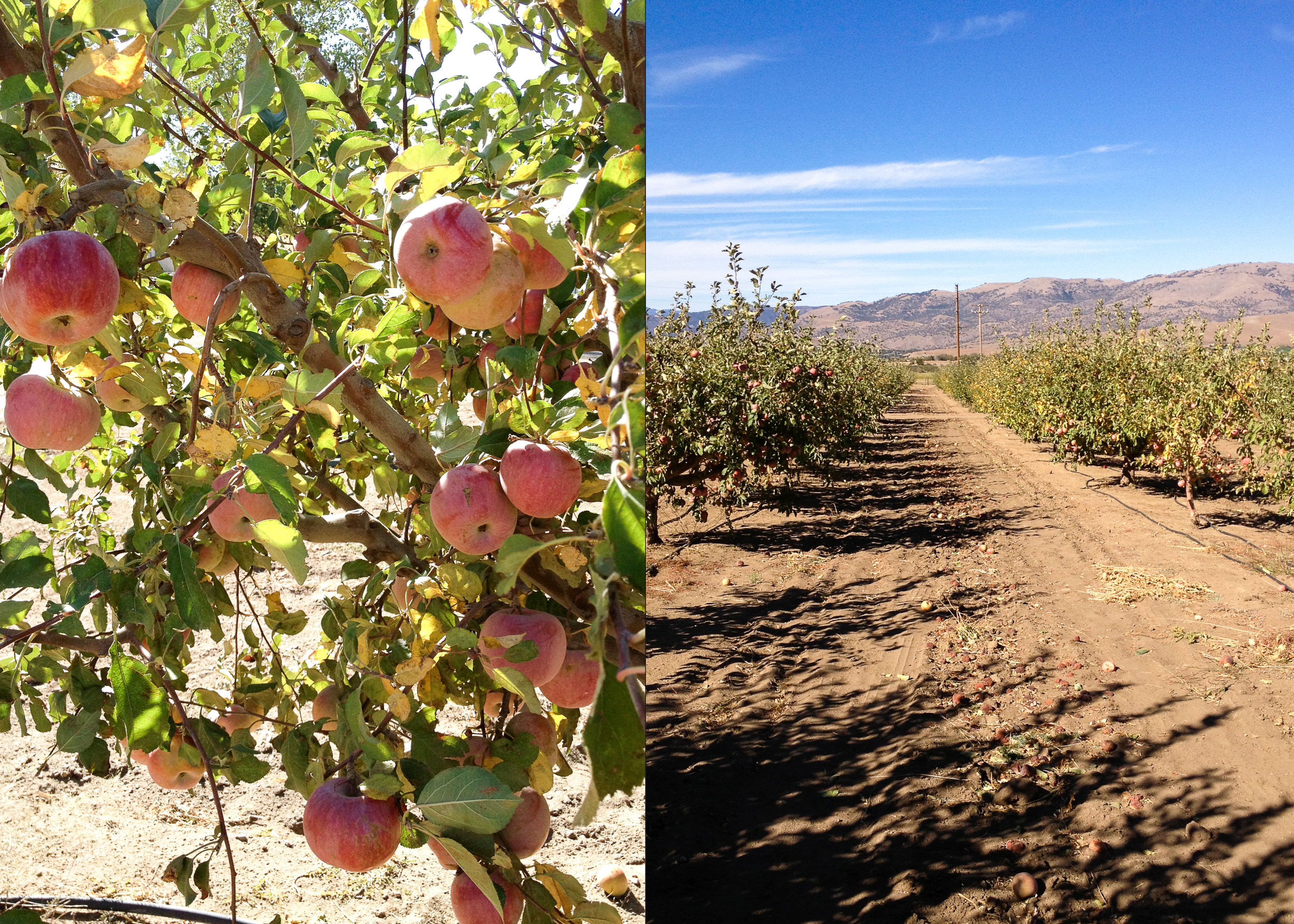 If you are going to attempt to make a this Crisp Apple Strudel Recipe (which is even easier than making a pie), you need to do three simple things:

First off, you want to pick the right apples so that the filling holds up well and the apples don’t disintegrate into applesauce, which would make the crust soggy.  I asked the owner at Pulford Orchard for her suggestion on the best apples to bake with, and she introduced me to both the Empire and the Jonagold varieties.  Both these types of apples have a tart sweetness, and she assured me that they would hold up well when baked or cooked. Empire apples, a cross between McIntosh and Red Delicious, are full, round, and come in the most brilliant shades of crimson red.  They are so enticing that I’m convinced that this must be the type of apple Snow White fell for.  If these varieties aren’t available to you, I’ve also used Granny Smith and Fuji Apples (or a mix of them) with great results.

The second thing to do to assure a crisp strudel is to control moisture content.  The best way to do this is to make a cooked filling before putting it into the pastry crust.  This isn’t the most authentic way to make a strudel, but for consistent, predictable, and delicious results every time, this method has always worked for me.  Just make sure to completely cool the filling before joining it with the pastry.

The last “must-do” for a crispy strudel is to take care in preparing the pastry crust.  Taking care doesn’t actually mean more work for you…in fact, it means less!  This recipe uses a store-bought phyllo dough.  Usually, it’s common to paint melted butter in between the layers of phyllo with a large pastry brush to give the pastry good flavor and to allow for it to brown-up nicely.  I wanted to lighten up this strudel a bit, both in calories and in texture, so I used a coconut oil spray instead of butter.  It worked out great–the pastry was light, flaky, less greasy, and the spray was so simple to use! 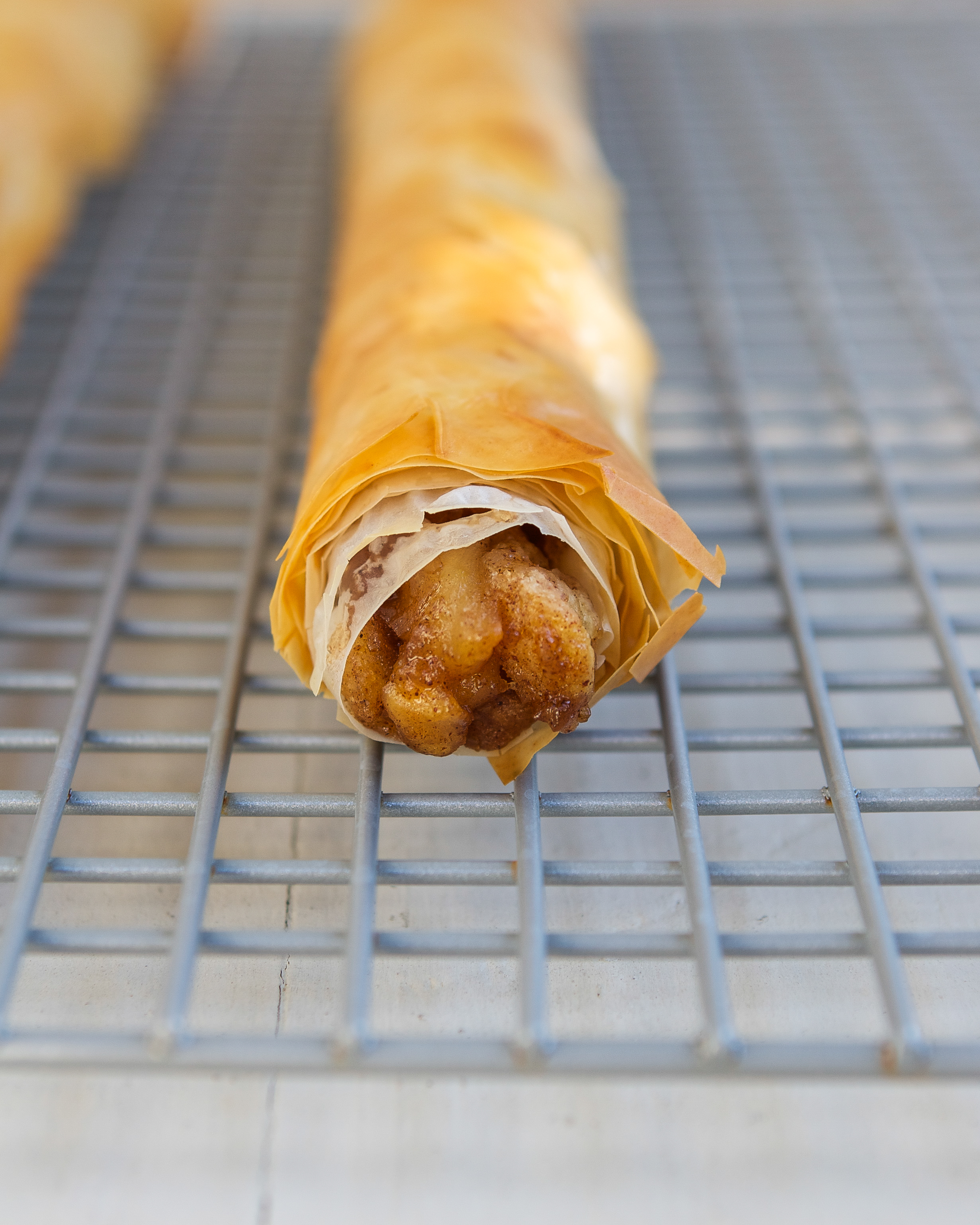 Crispy…check!  And now we figure out how to amp up the apple flavor in these strudels!

There are a few distinctively European ingredients that make this pastry taste much more like a strudel than an apple pie.  Calvados is an apple brandy mainly produced in Normandy, France.  It’s commonly used to flavor tarte tartin, a classic French apple tart.  In this recipe I’ve used it in place of Austrian apple brandy.  Using Calvados concentrates the flavor of the apples, enhancing the fruit flavor and making the acidic notes brighter.

The next special ingredient used in this strudel is cardamom, a spice found in many Scandinavian baked goods.  This unusual spice adds a warmth and woodsy fragrance to this strudel, but cardamom is an acquired taste so start with 1/4 teaspoon and then gradually add more if you prefer.

Marzipan gives a finishing Austrian touch to these apple strudels.  This is a paste made from ground almonds and sugar, used a lot in European dessert making.  Marzipan is commonly shaped and detailed to make small candy figures, because it is highly moldable and holds structure well for small shapes.  Marzipan adds a smooth richness to the apple filling here, a little something to make these strudels extra special. 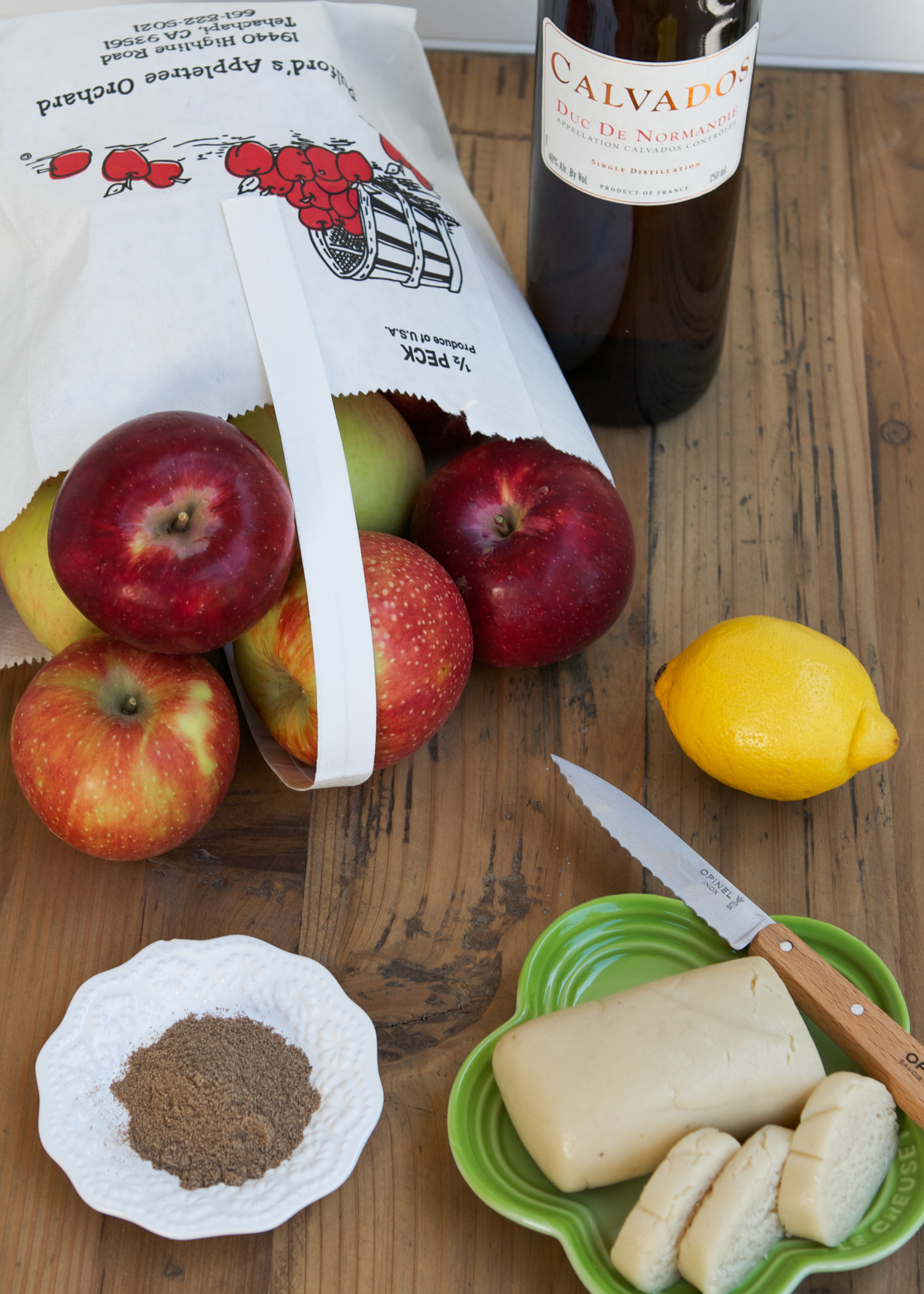 A few key ingredients to make this strudel authentically European

Don’t let fall pass by without giving these strudels a try.  With some key ingredients, a few good apples, and a love for all things crispy, it’s very possible that they may become one of your favorite things too!

2 Tbsp Calvados or other apple brandy

10 sheets of phyllo dough, thawed and covered with a moist paper towel

powdered sugar and cinnamon to garnish

1.)  Peel, core, and dice the apples into 1/2 inch cubes.  Place aside in a medium bowl.  Meanwhile, melt the butter on medium heat.  After the butter has melted, add the diced apples and spices and cook for about 5 minutes until slightly softened.

2.)  Make a cornstarch slurry mixture by placing cornstarch in a small bowl and mix in 2 Tbsp of water to it.

3.)  After 5 minutes and the apples and butter have had a chance to mingle, add the Calvados.  Let the alcohol cook out and then mix in the brown sugar.  After the brown sugar has been incorporated, mix in the cornstarch slurry and let it cook until you have a thick, glossy apple filling mixture.  Turn off the heat and mix in the lemon juice.  Place this apple filling in a medium bowl, cover, and let it cool completely.  You can place this filling in the refrigerator to hasten the cooling process.

4.)  After filling has cooled, tear the bread and marzipan into pea sized bits and mix them into cooled filling until you get a homogenous filling mixture.  Set aside.

7.)  With the stack of 5 phyllo sheets, now place the apple filling in a long row, about 1 1/2″ above the bottom edge of the phyllo sheet.  For one strudel roll you will use half of the filling.  Repeat #6 and #7 with the other 5 sheets of phyllo.

8.)  Transfer the two strudels onto a greased, parchment covered, or silpat lined large baking sheet, seam side down.  Spray the strudels once more with coconut oil and bake in oven for 15-18 minutes, or until lightly golden brown.

9.)  When the strudels have completely cooled (or almost…be patient!), use a serrated knife to cut each strudel roll into 6 pieces.  If you’ve waited long enough you’ll get nice clean slices of crisp apple strudel.  Garnish by sprinkling with powdered sugar and extra cinnamon.  For maximum crispness serve at room temperature within a few hours of baking. 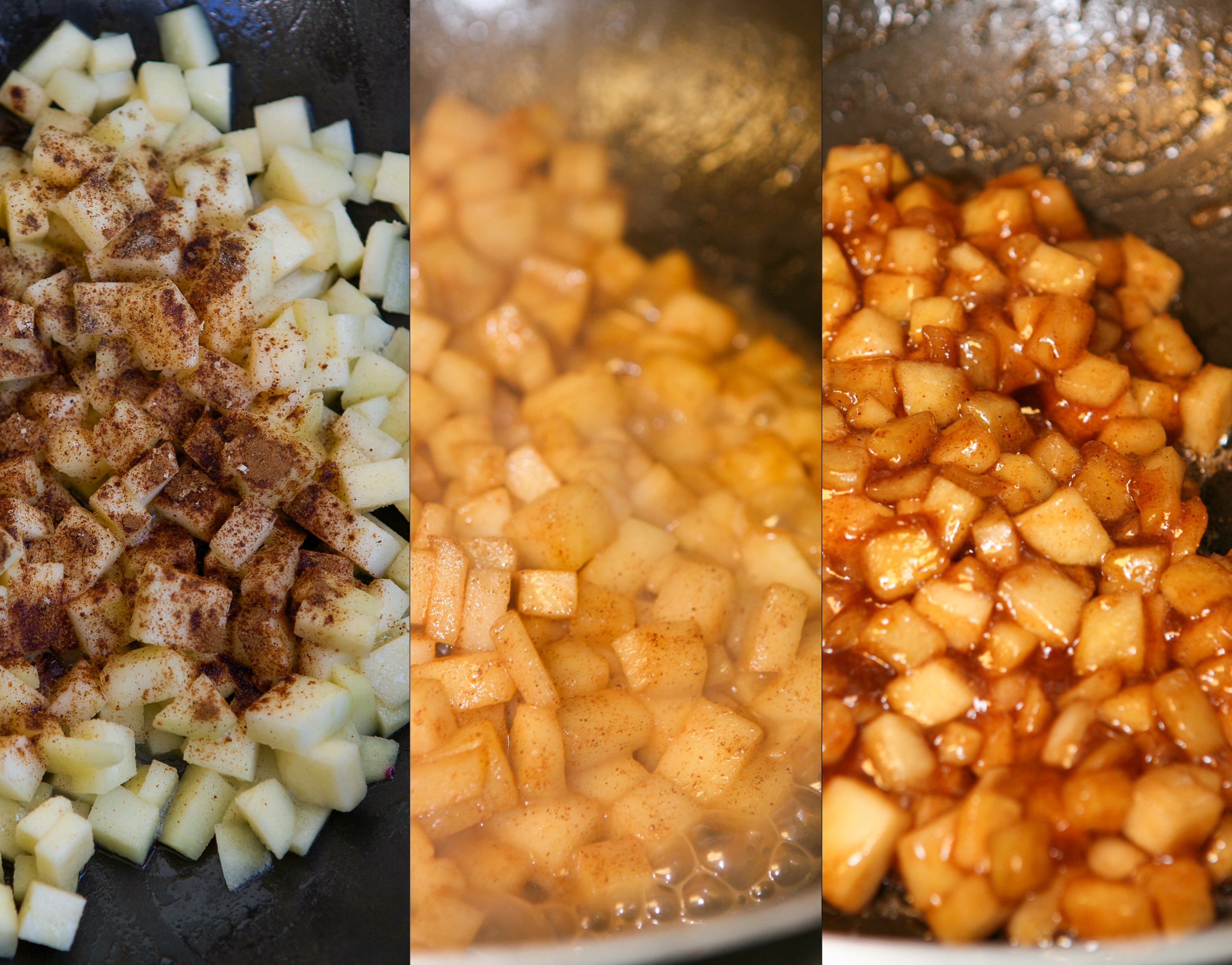 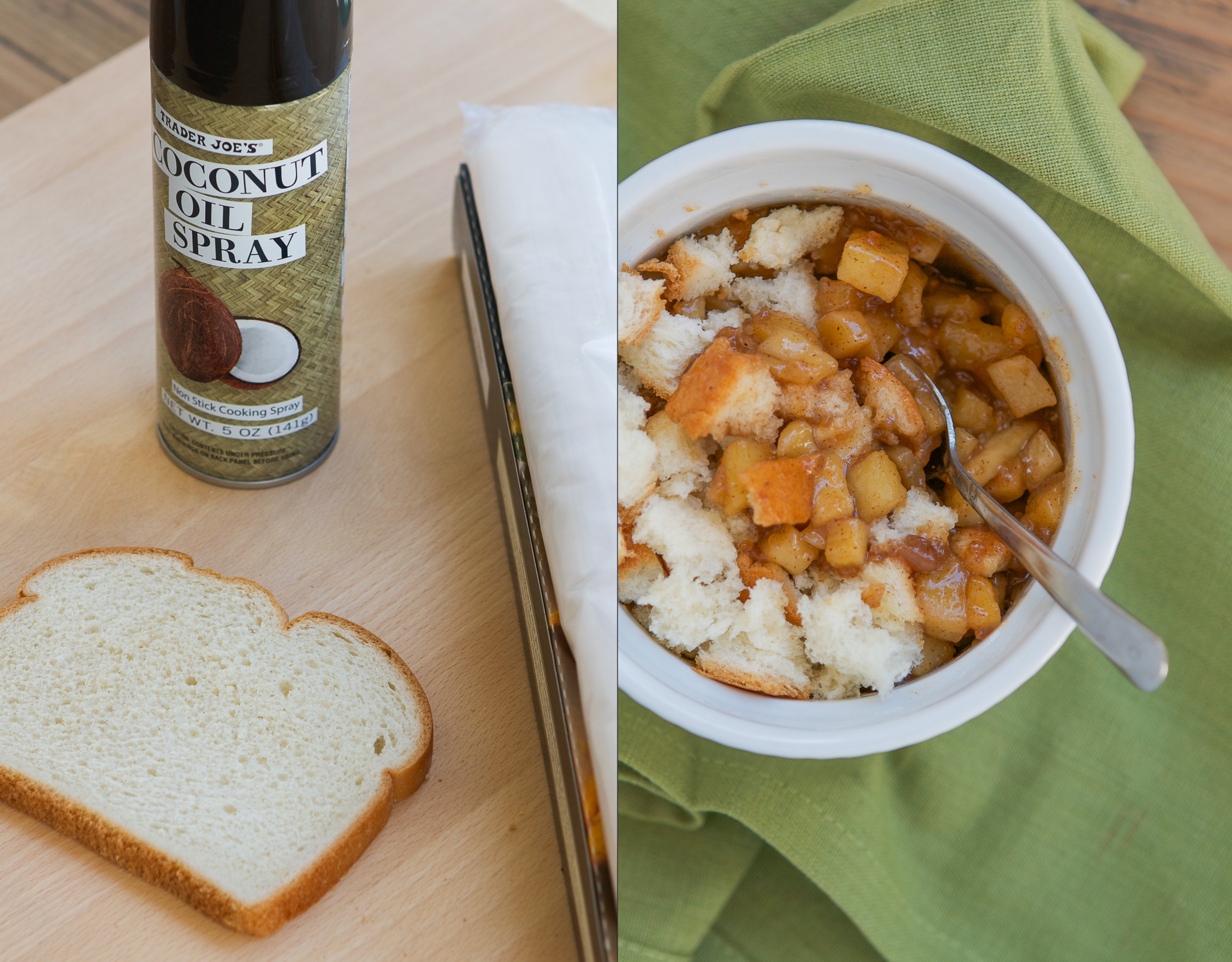 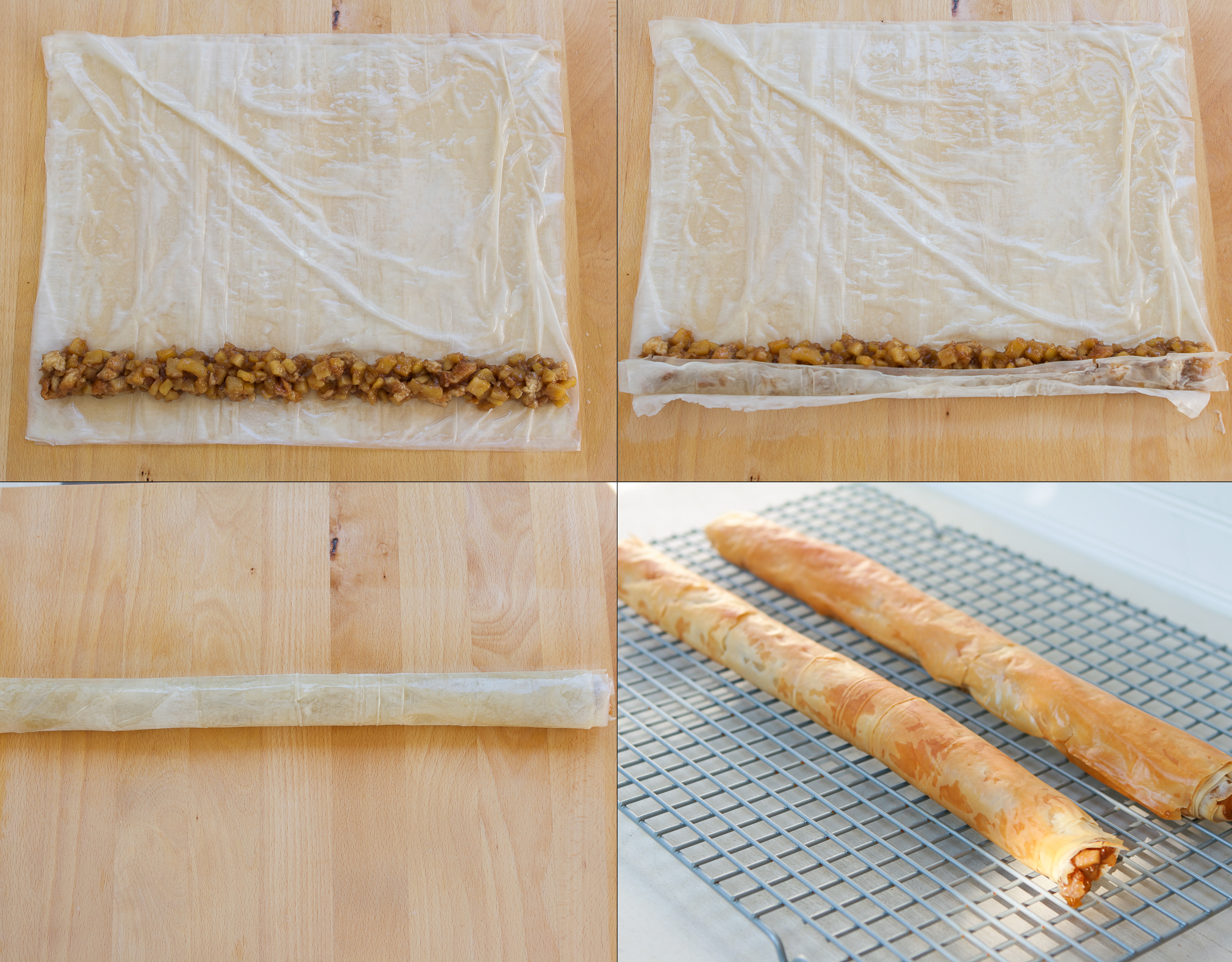 Place the apple filling 1 1/2″ from the bottom edge of the phyllo and tightly roll up to the top! 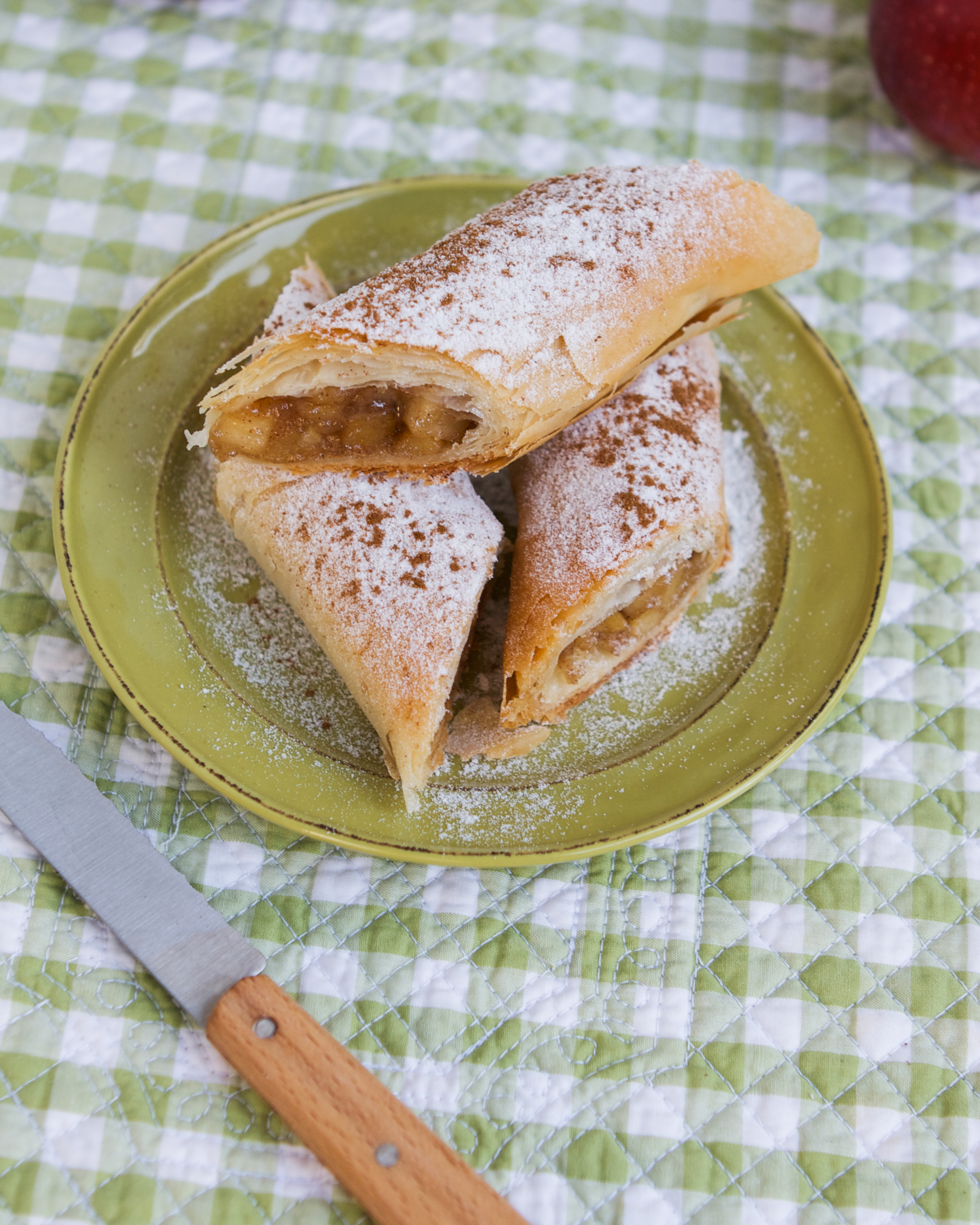 Be patient…wait until the strudel has completely cooled before cutting. Good things come to those who wait! 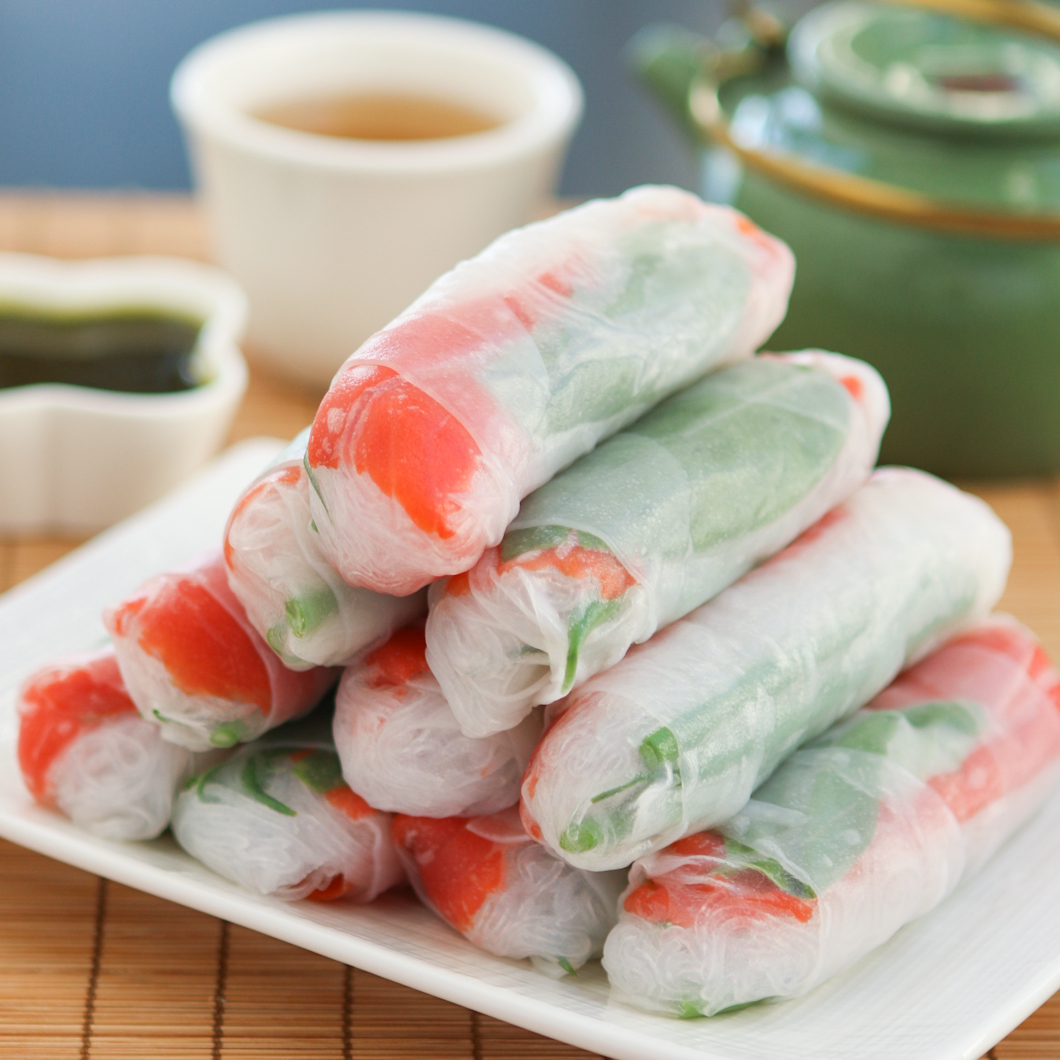 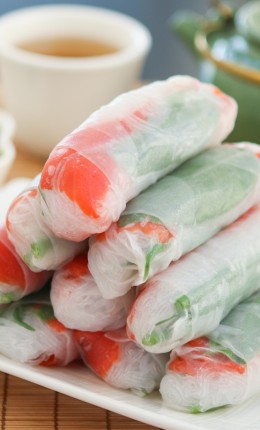 For me, the best of summertime eating always involves making plenty of spring rolls.  In hot weather, there’s nothing better than enjoying a light, fresh meal that won’t leave you feeling heavy or guilty. This Matcha Monday, I’ve created Smoked Salmon Spring Rolls with a savory Matcha Dipping Sauce.  A few weeks ago, I... MORE >> 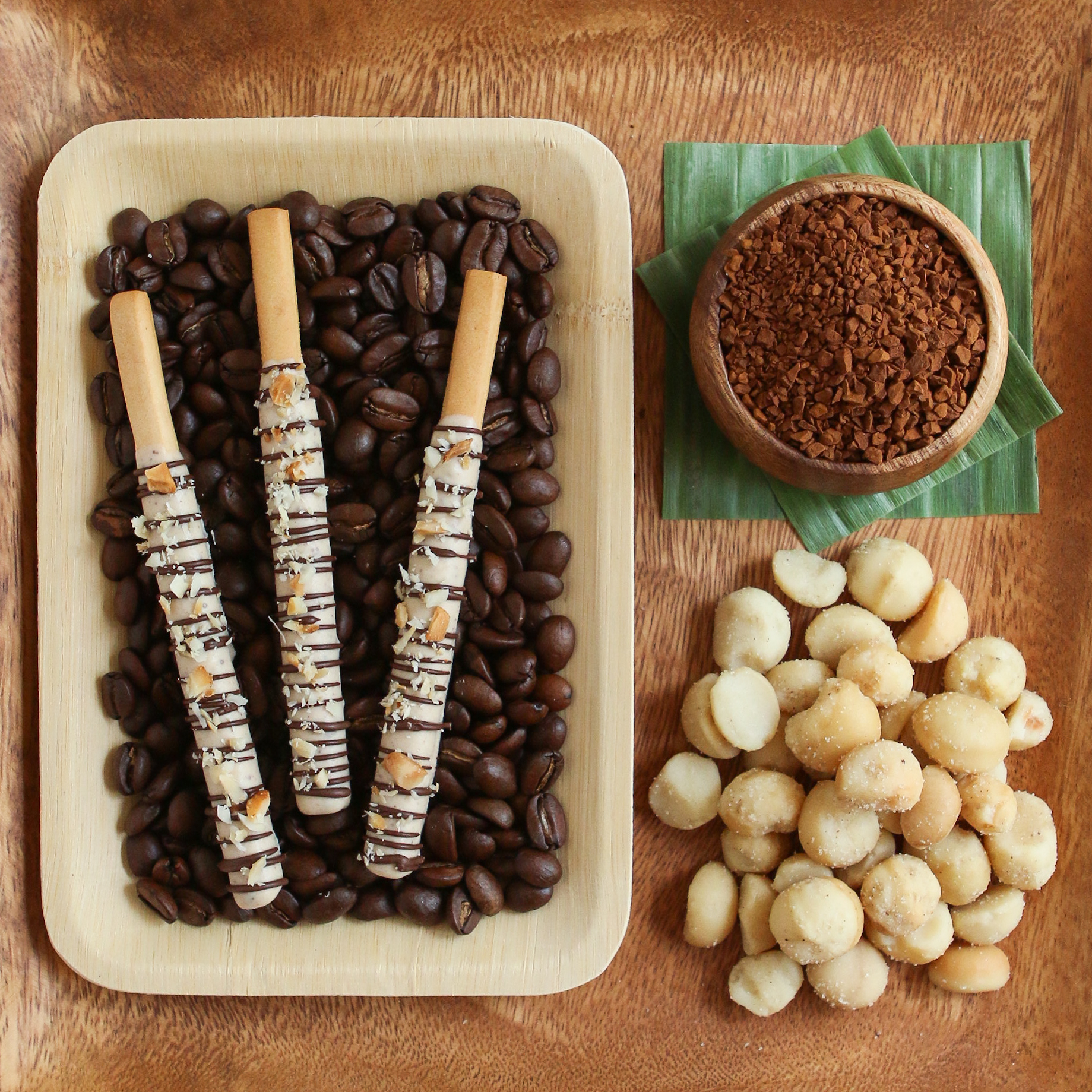 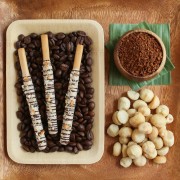 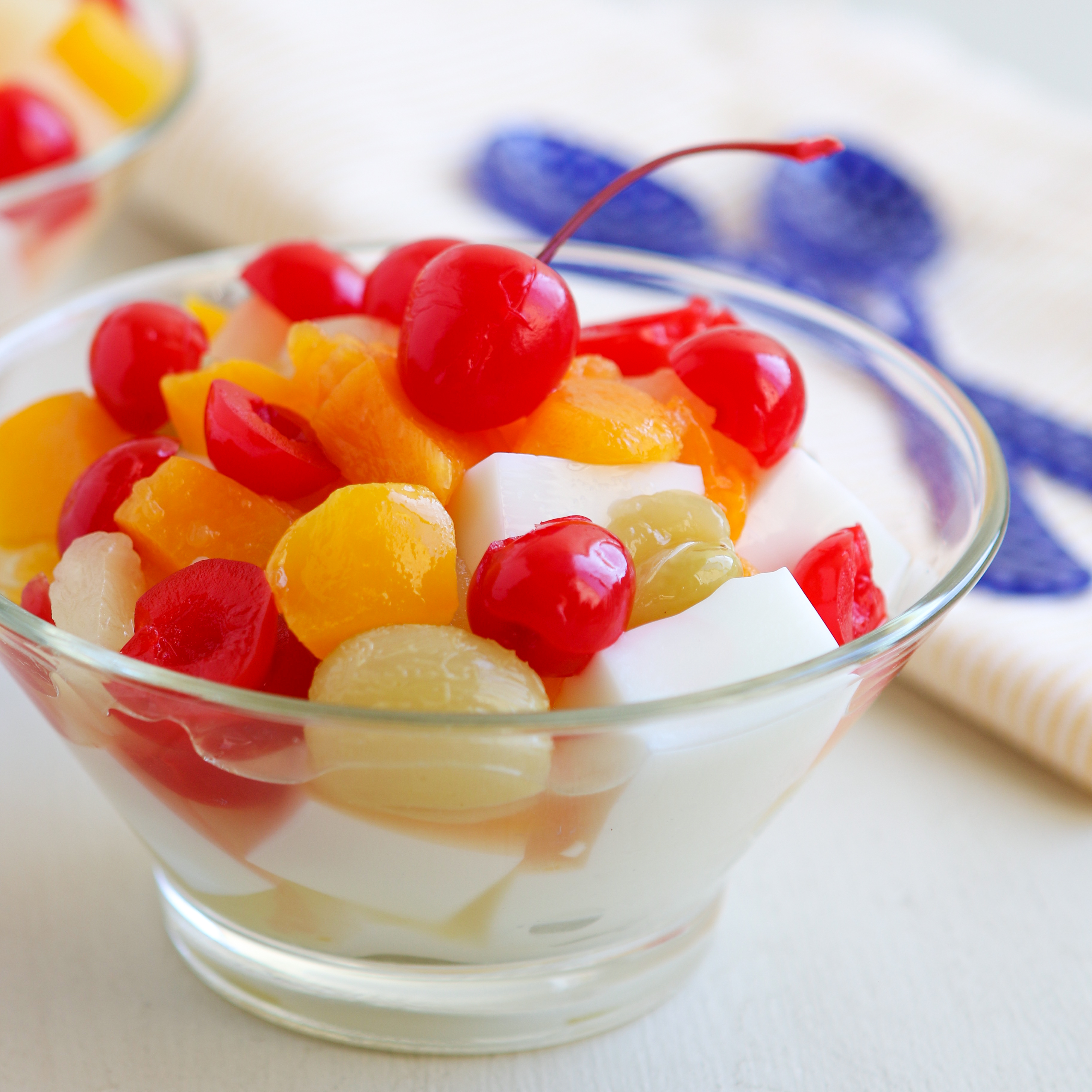 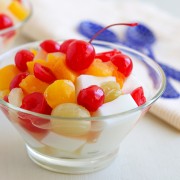 There are few Cantonese desserts as classic as Almond... MORE >>