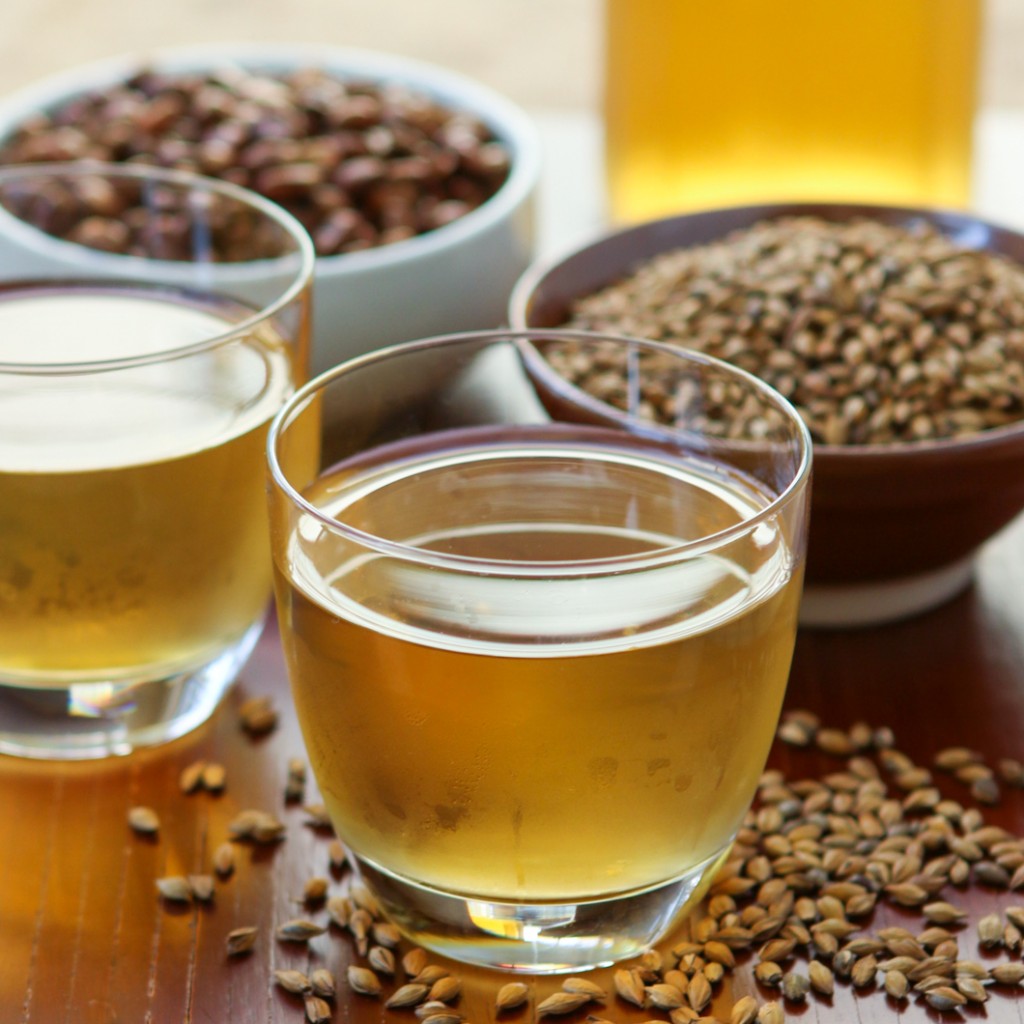 After coming back from the World Tea Expo, I spent the lot of last week moving from my small apartment into a larger house.  I don’t know what my husband and I were thinking when we planned for a move smack in the middle of hot, sunny June.  The heat was relentless and the work was endless, not to mention that we couldn’t get the internet hooked up until just yesterday.  Amidst mountains of cardboard boxes lying around, I ripped open the box labeled “kitchen” and grabbed the first stockpot I could find.  Throwing some barley and water into the pot, 20 minutes later I had boiled up some wholesome Boricha.  Later that evening when winding down from the exhausting move, a tall, chilly glass of Korean Barley Tea was pure, simple comfort. 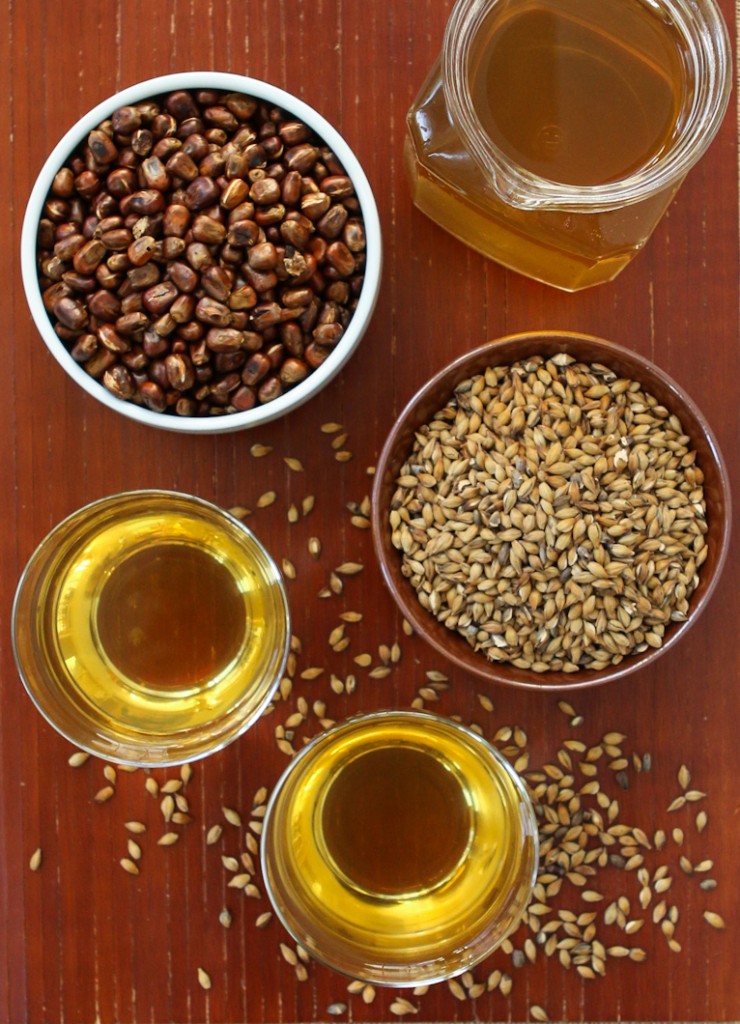 Barley tea is called Boricha in Korean and Mugicha in Japanese.  You can’t go to any Korean restaurant without being served plentiful cupfuls of this golden liquid.  After the Tea Expo festivities were over, I had purchased some large bags of roasted barley and roasted corn in the South Bay area of LA, a place brimming with Korean eateries and food markets. Searching for some new and interesting Korean teas actually led me right back to the classics: barley and corn tea.  Previously, I had only made pre-portioned tea bag barley tea, but after seeing rustic sacs of beautiful grains at S-mart in Torrance, I decided to give the homemade version a try.

Boricha is nothing more than toasted barley boiled in water.  This tisane is caffeine-free but takes on the a golden tea-like shade of honey after the barley has been boiled.  It’s taste is nutty and slightly sweet with warm, toasty undertones.  In the best way possible, it’s kind of like drinking beer without the alcohol and carbonation.

Although I purchased barley that was already roasted, you can buy unroasted barley and toast it yourself at home, to a darkness of your liking.  Simply place a large, heavy skillet (cast iron will work well) on medium high heat on the stove, then throw the washed grains into the skillet. Use a wooden spatula to move the barley grains around the hot pan until you get an even, medium shade of brown to all the grains (they should look something like the photo below). 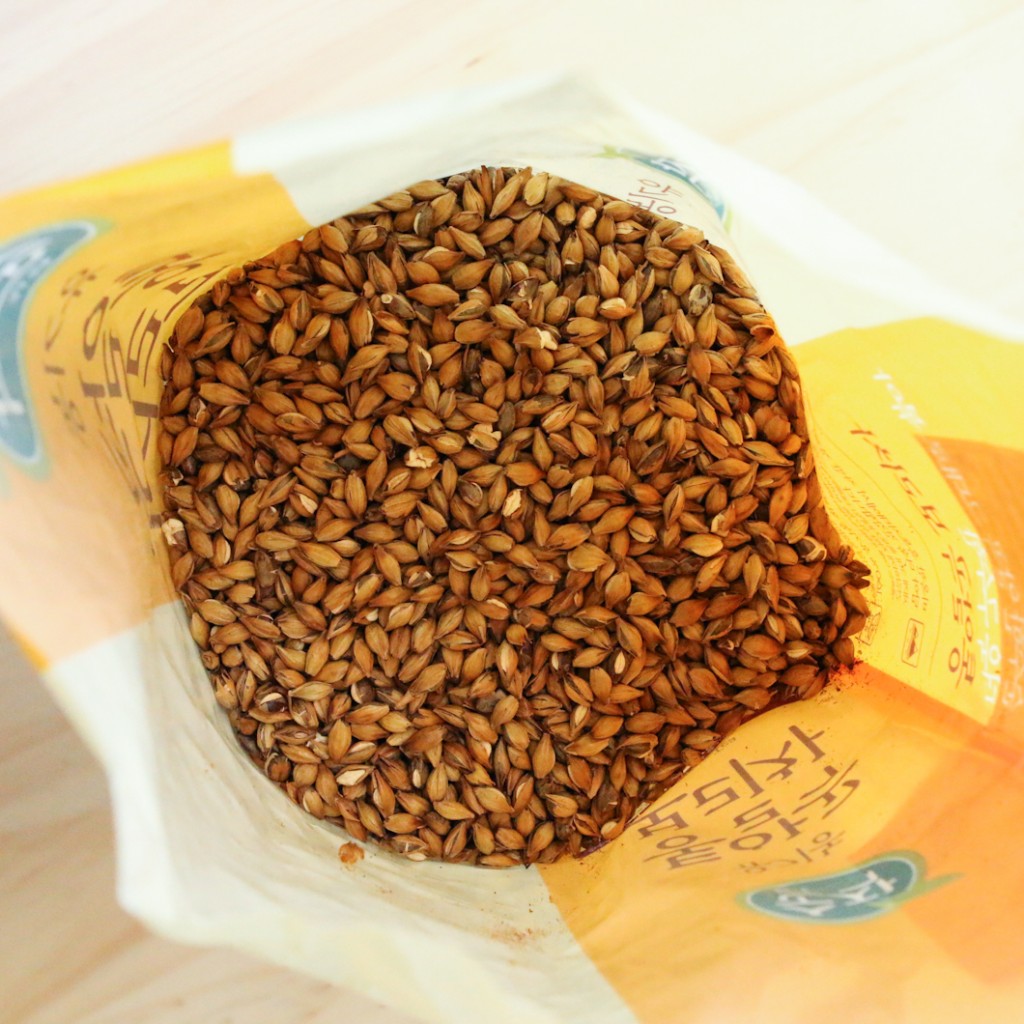 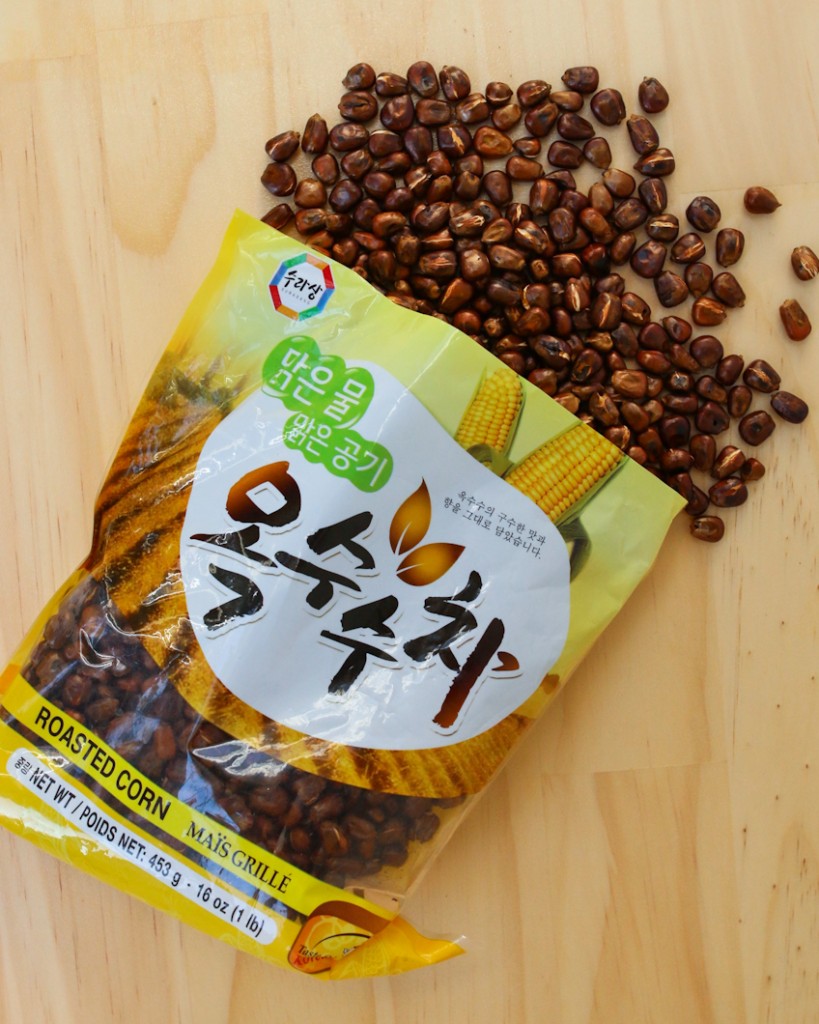 In my opinion, barley and corn teas are best enjoyed chilled, without any additions (not even ice!).  In the winter time, many enjoy this brew hot with a bit of honey or lemon added.  As summer time approaches, Korean Barley Tea is the perfect thirst quencher, and can be served any time of day as the brew is entirely caffeine-free.

This is an ideal beverage to serve with Korean food (bulgogi, kalbi, japchae) or spicier dishes–consider it like an Asian House Iced Tea.  As the days get longer and weather gets hotter, make plenty of crisp, refreshing Korean Barley Tea to store in the fridge.  Sipped by the pool, guzzled after hitting the gym, or gulped to calm your taste buds after eating some fiery hot slices of kimchi, I’m sure you’ll enjoy this wholesome and simple staple of Korean cuisine. 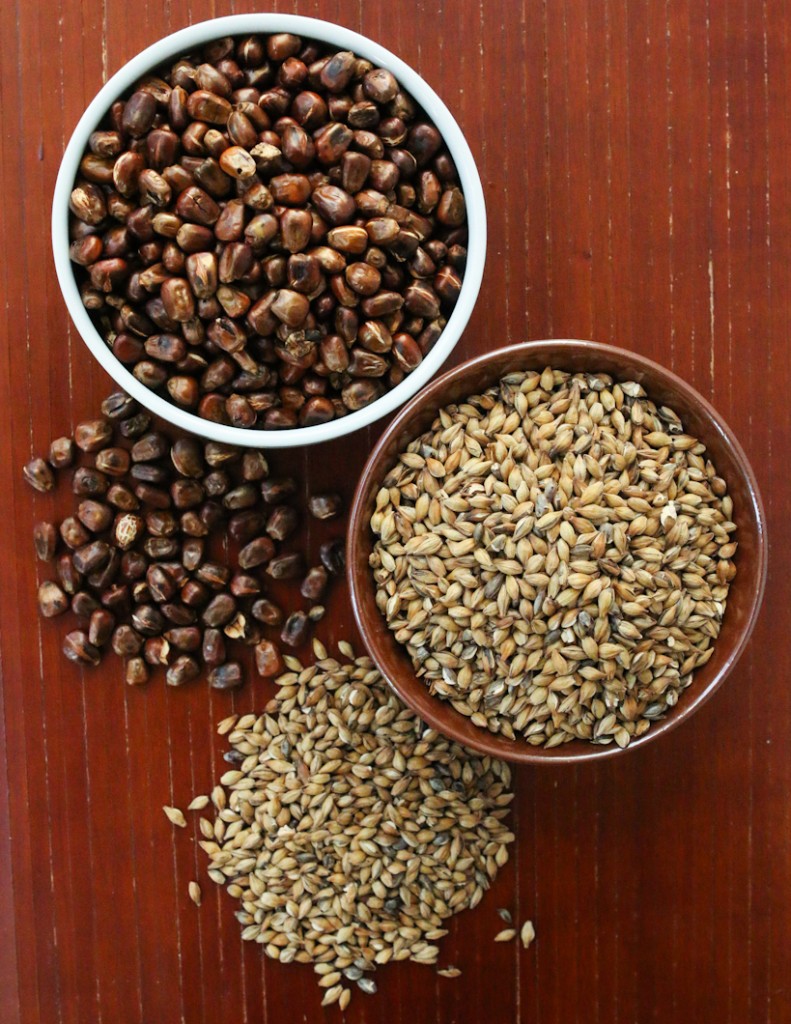 1.)  In a strainer, rinse the barley (and corn, if using) under cold water.  Place the grains in a large pot and add 2 quarts of spring water. 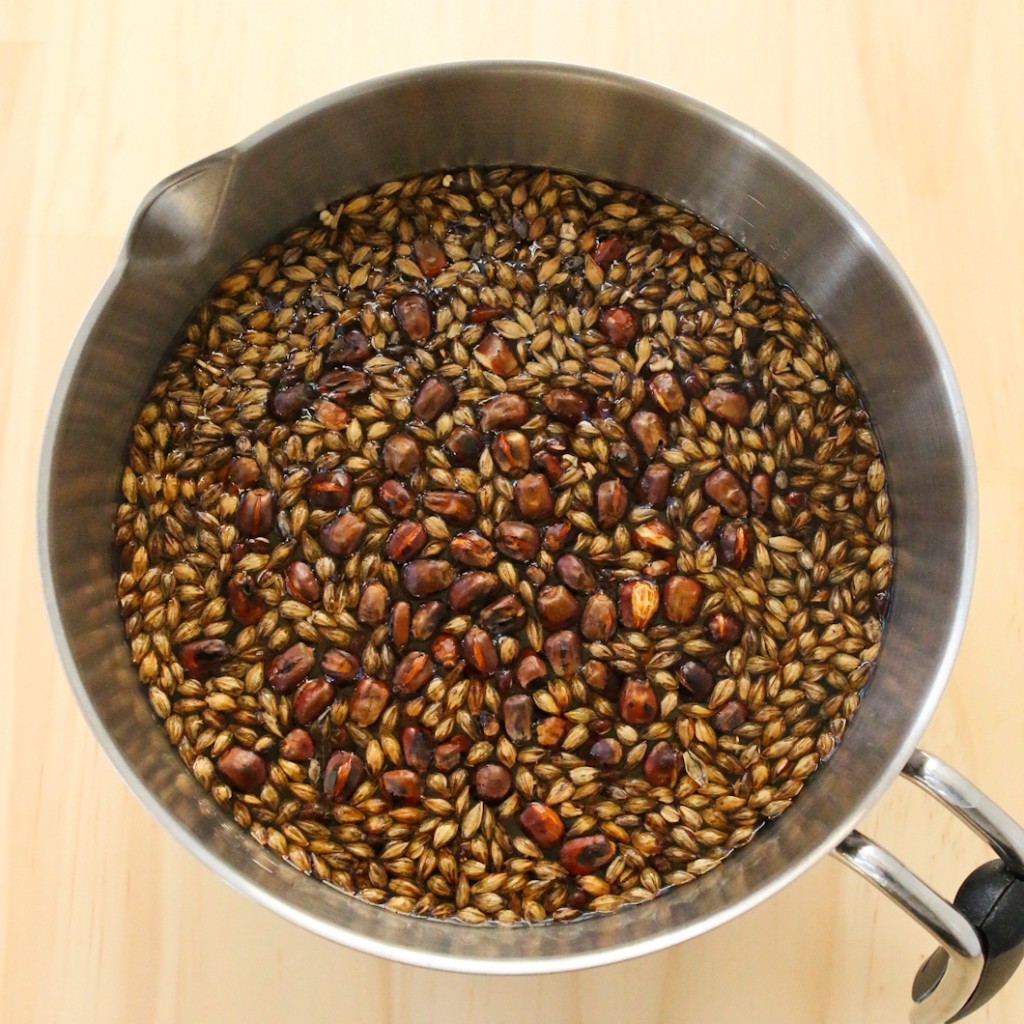 2.)  Place the water-barley mixture on the stove and let it come to a rolling boil. 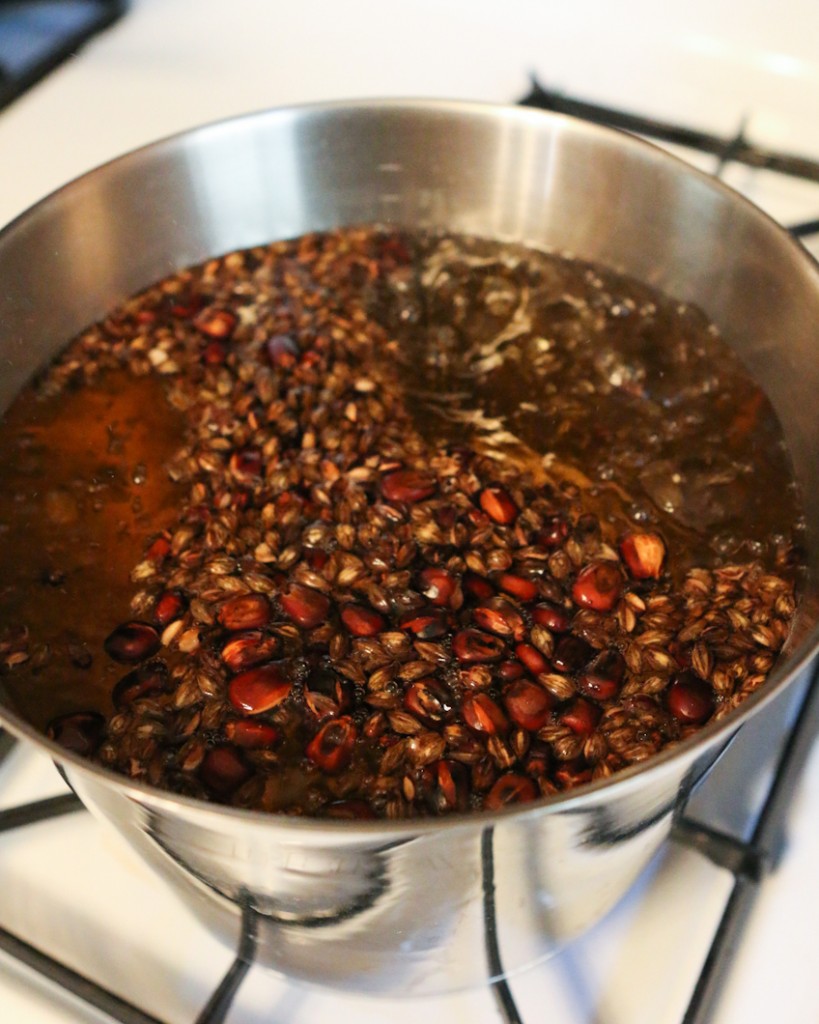 3.)  Simmer the tea on medium heat for 20 minutes.  After the 20 minutes are up, you will notice that the grains have settled to the bottom of the pot. 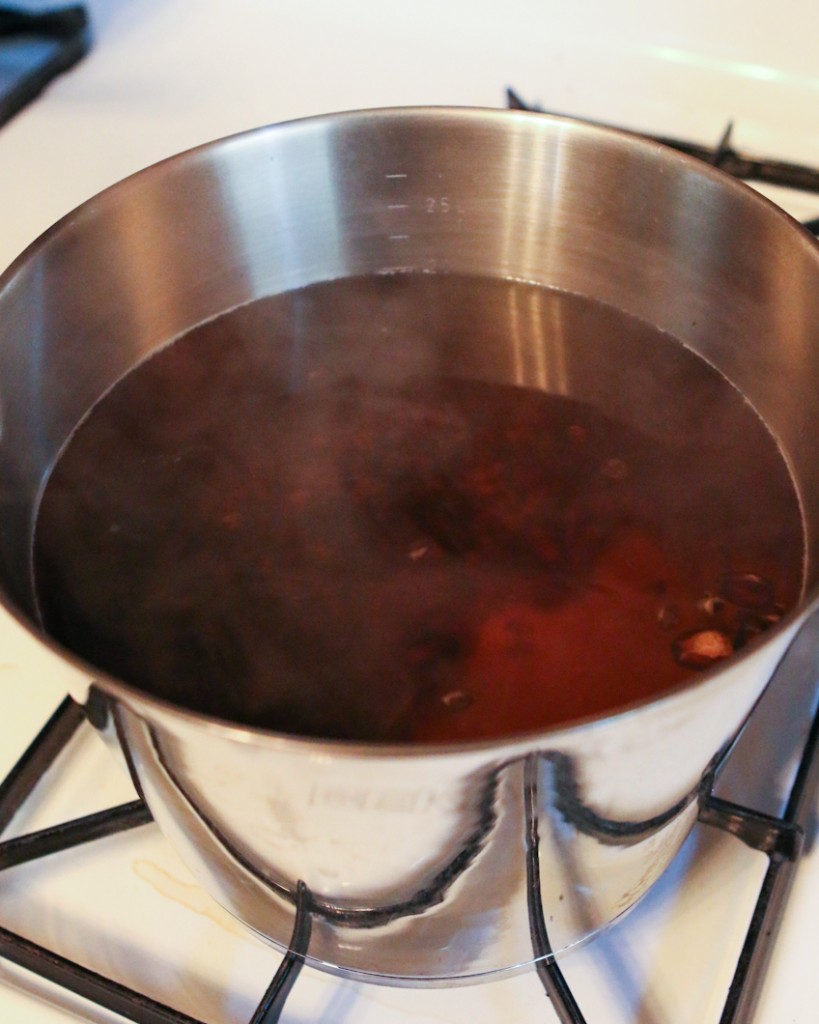 4.)  Carefully pour the tea through a fine mesh sieve or piece of cheesecloth (in a sieve) into a large pitcher. 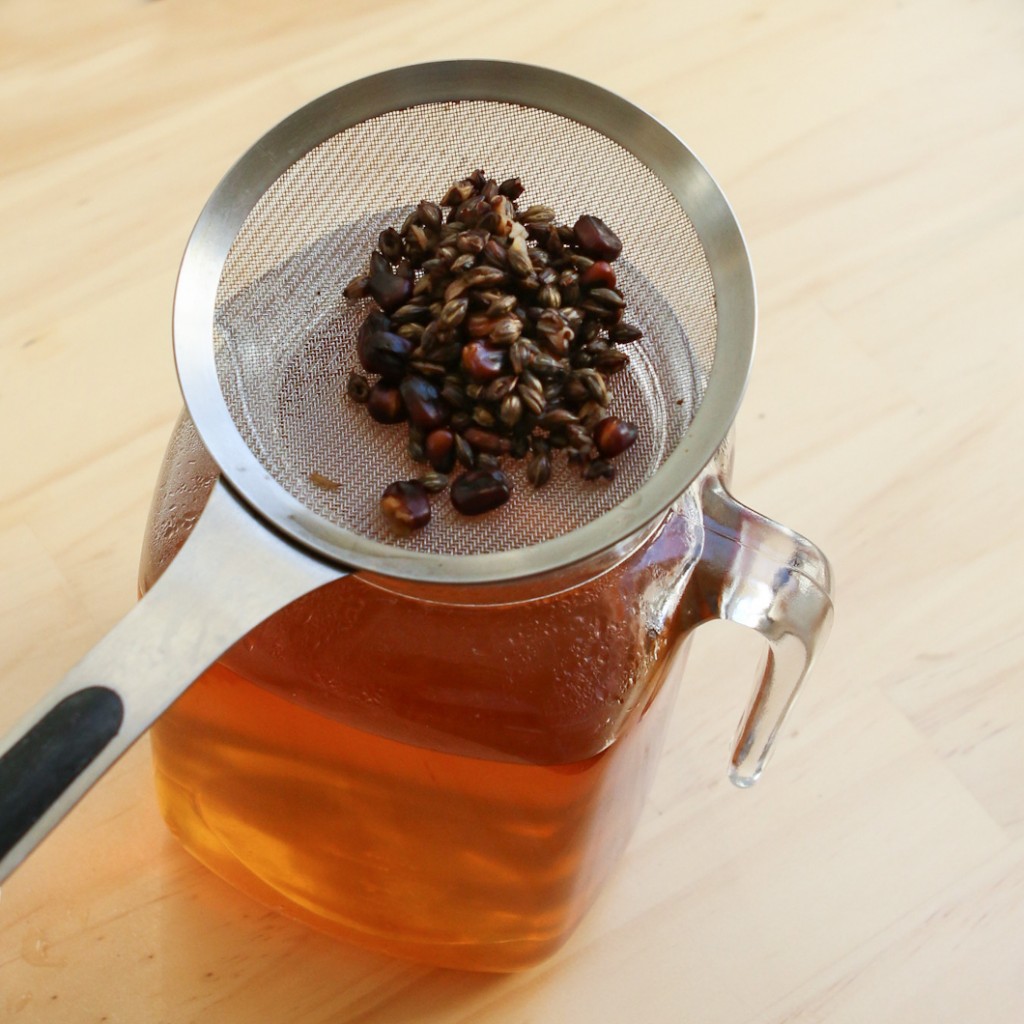 5.)  Let the tea come to room temperature, then cover and place in fridge to cool completely.  I like to serve the tea chilled, without ice, but it can also be served warm or hot…easy right? Enjoy! 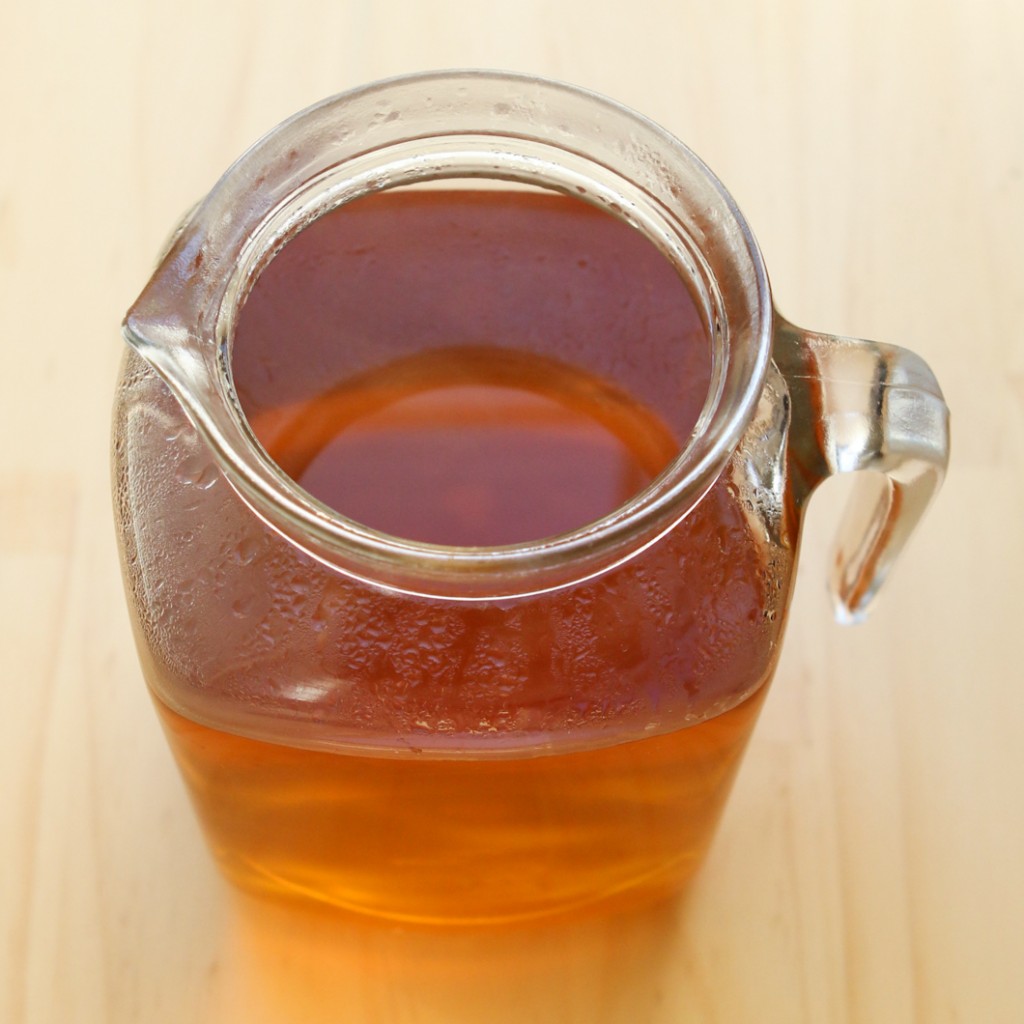 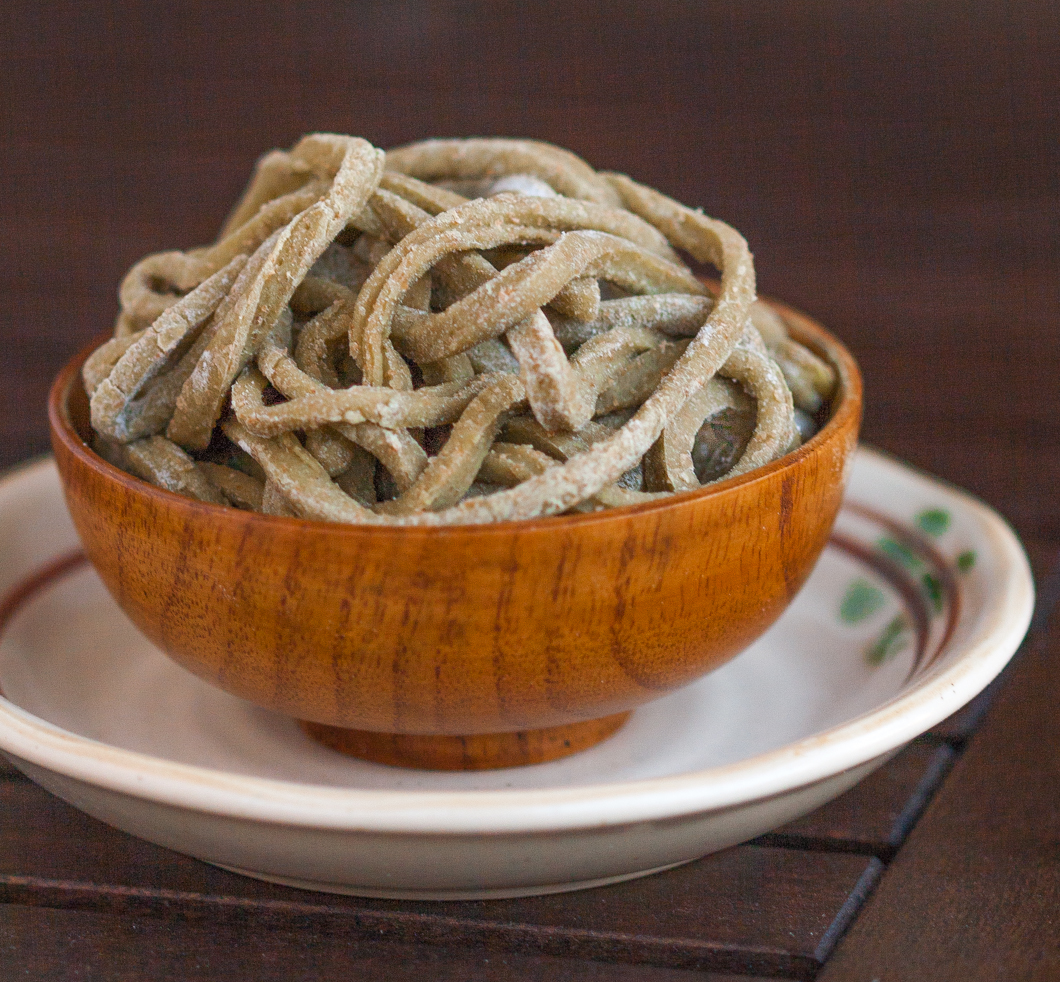 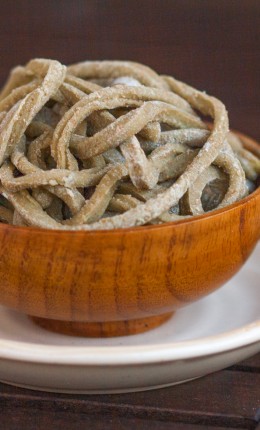 Soup noodles are Asian comfort food.  The are the quintessential cold-weather meal as they are delicious and so easy to prepare.  All you need is a rich stock (boxed is fine!), cooked meat (even lunch meat will do!), and some veggies (pre-washed works!) and dinner is ready. It’s so easy to buy pre-made wheat noodles... MORE >> 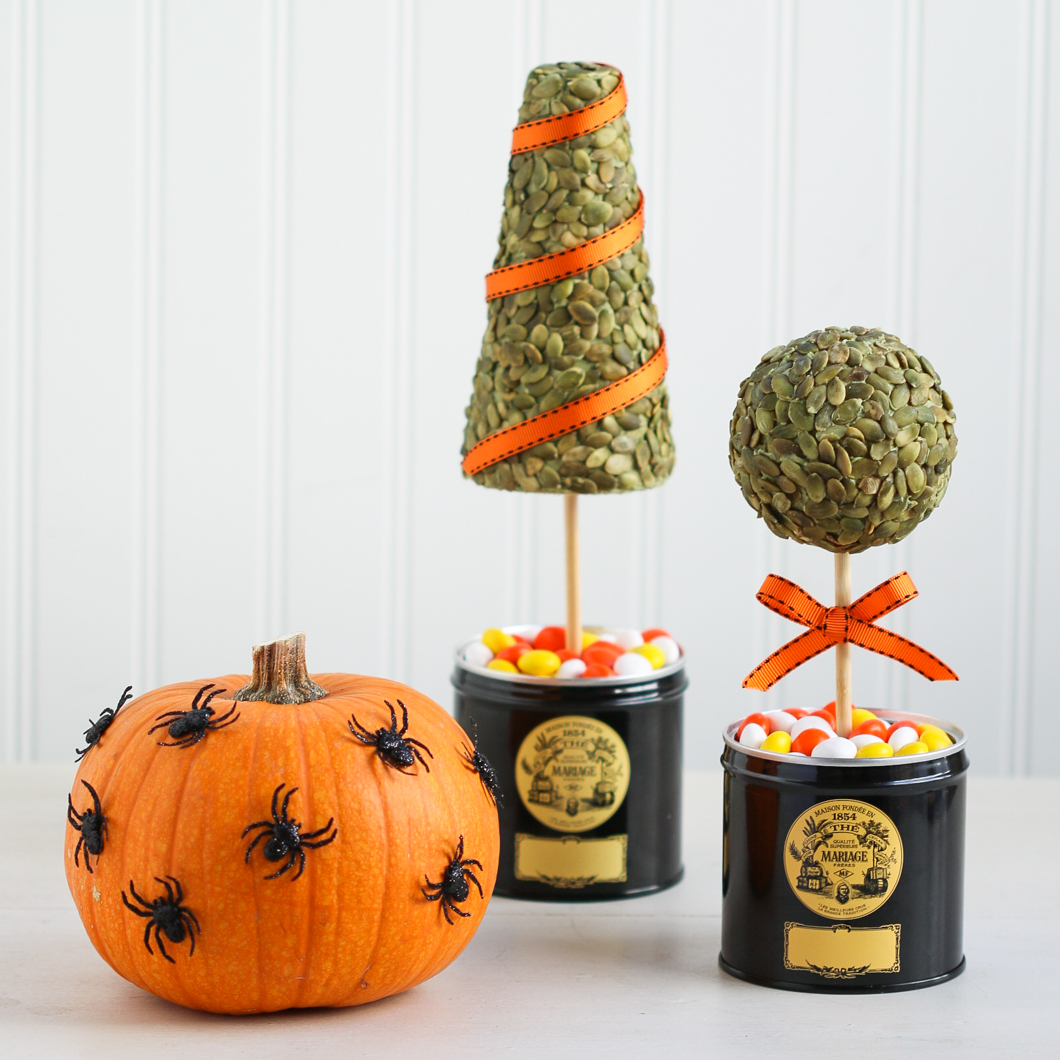 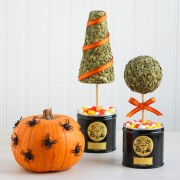 There’s something mysterious and elegant about black tea tins.... MORE >> 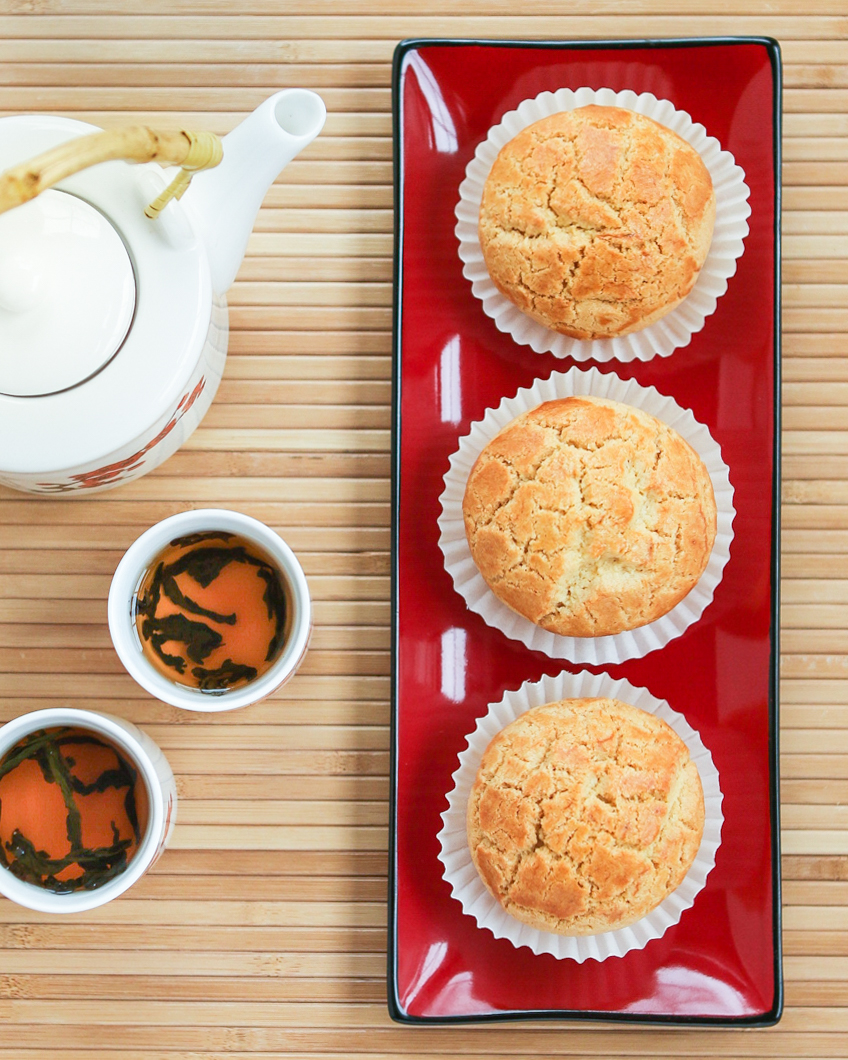 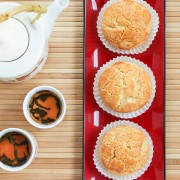