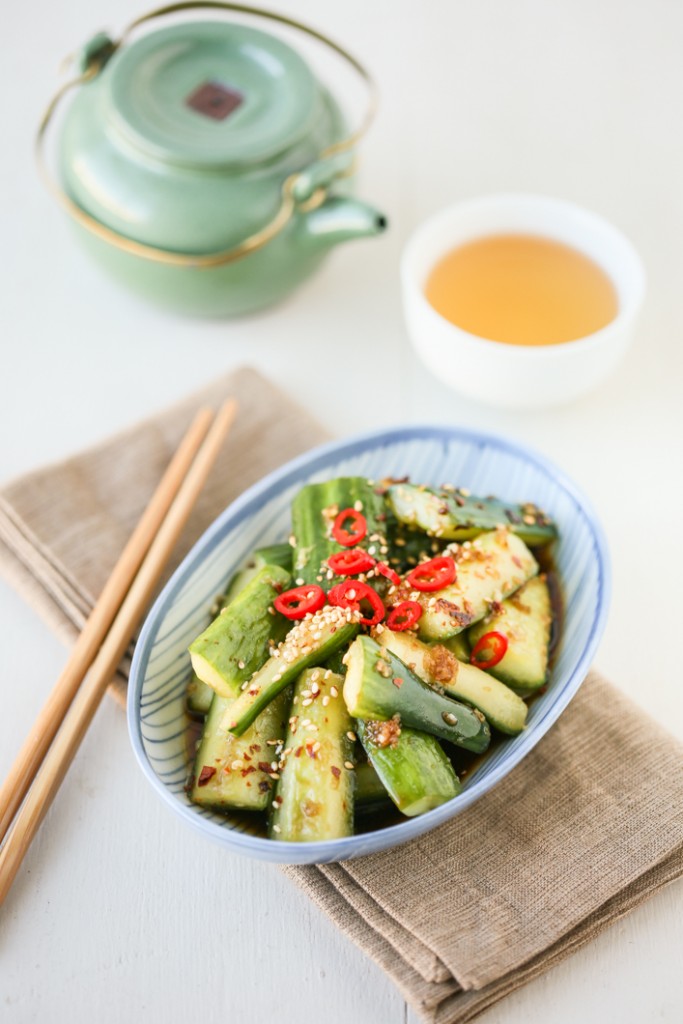 It’s commonly known that cucumber sandwiches and tea go hand in hand, and the same is true for Chinese-style cucumbers and tea. The light, cool, crunch of cucumbers complements a hot cup amazingly well–they’re a textural delight and also healthy and easy to make. 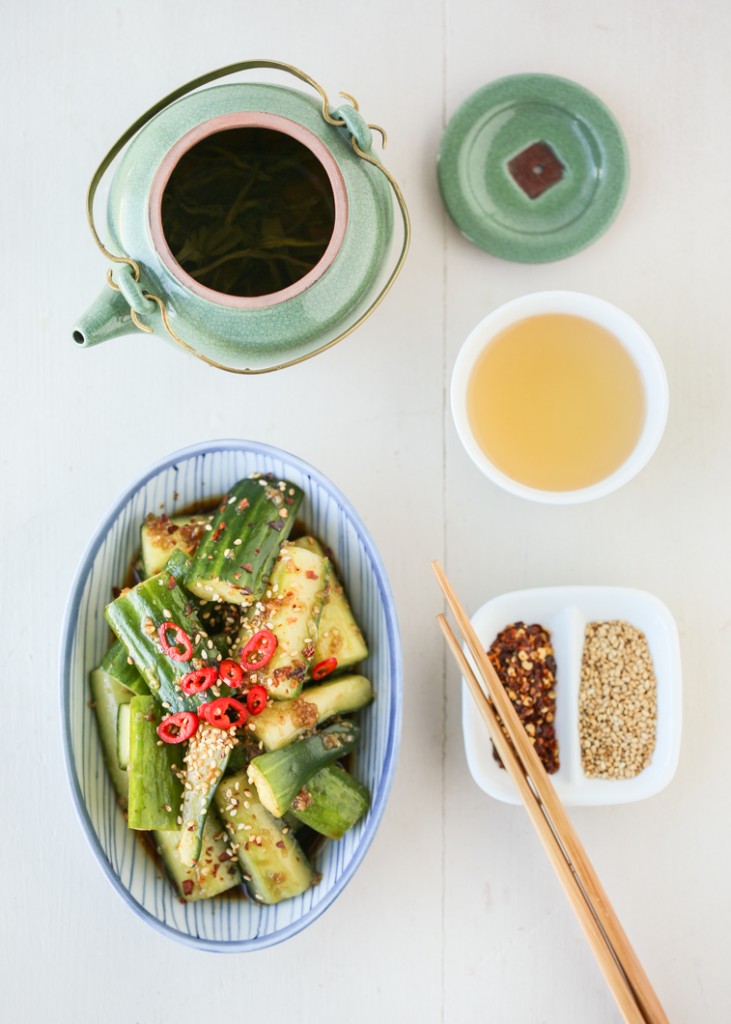 Chinese cucumbers aren’t sliced super thin they way they are for cucumber sandwiches. After cutting the cucumber into baton-like pieces, you set each piece under a flat blade to be smashed. Much like with garlic, the pieces split to create crevices where flavorings can later soak in. 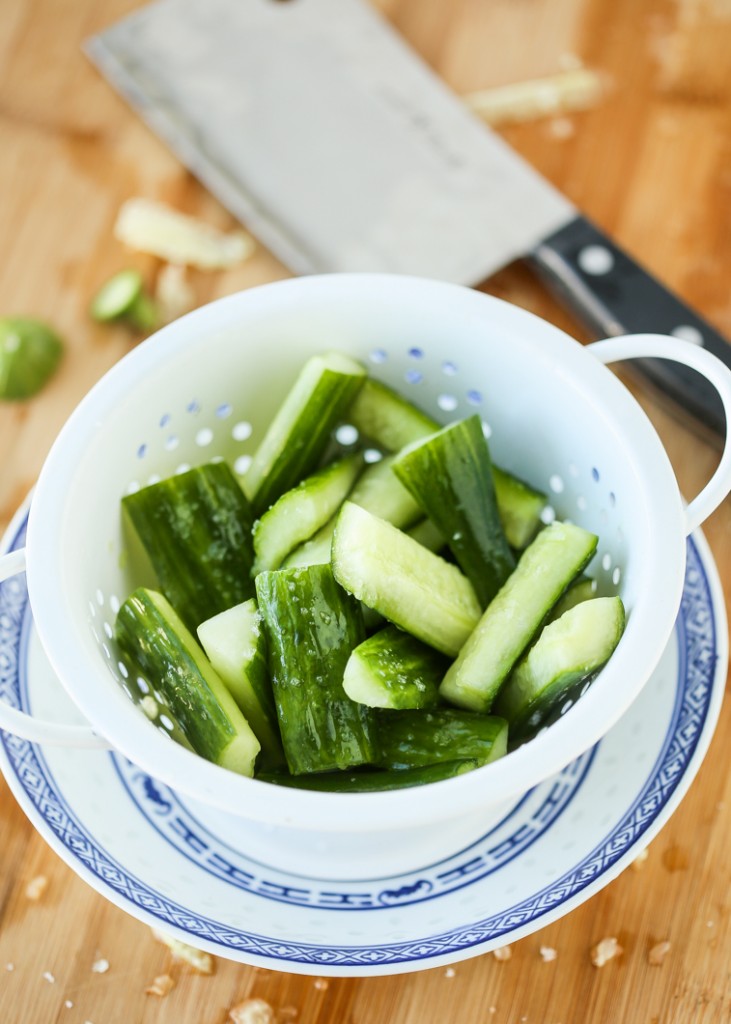 To rid the cucumbers of extra moisture, you’ll want to salt them before joining them with the flavorings. Soy, vinegar, garlic, and chili oil bring on a big punch of spiciness here, just in time for tea to come to the rescue 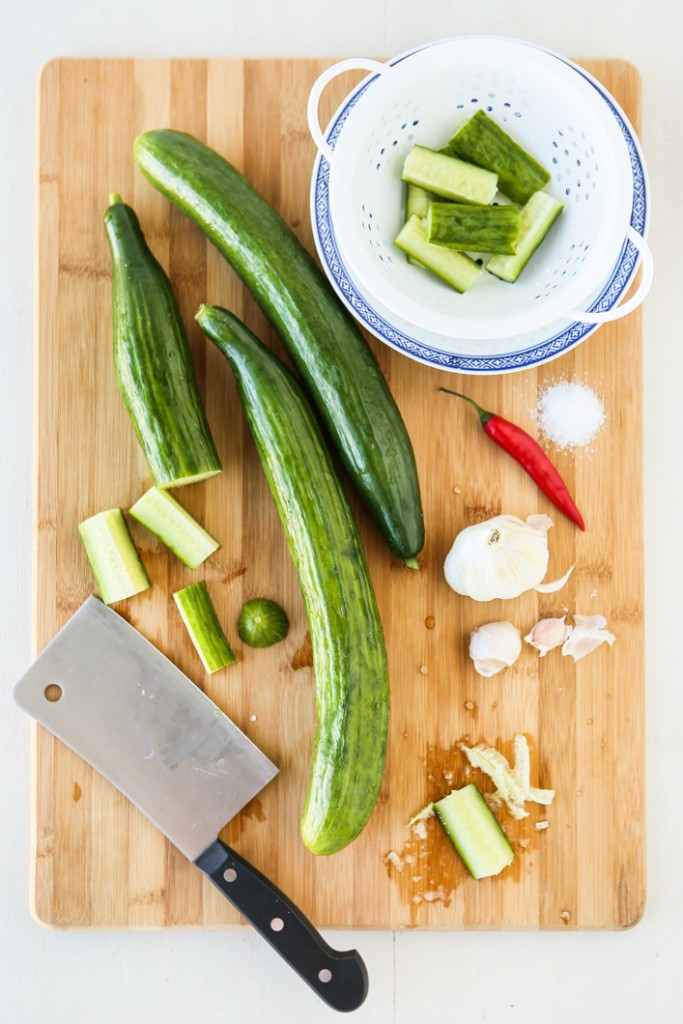 You can tame the fiery kick in these cucumbers by reducing the amount of garlic and hot pepper and omitting the chili oil. Instead, garnish with chopped cilantro and roasted sesame seeds for a milder dish. 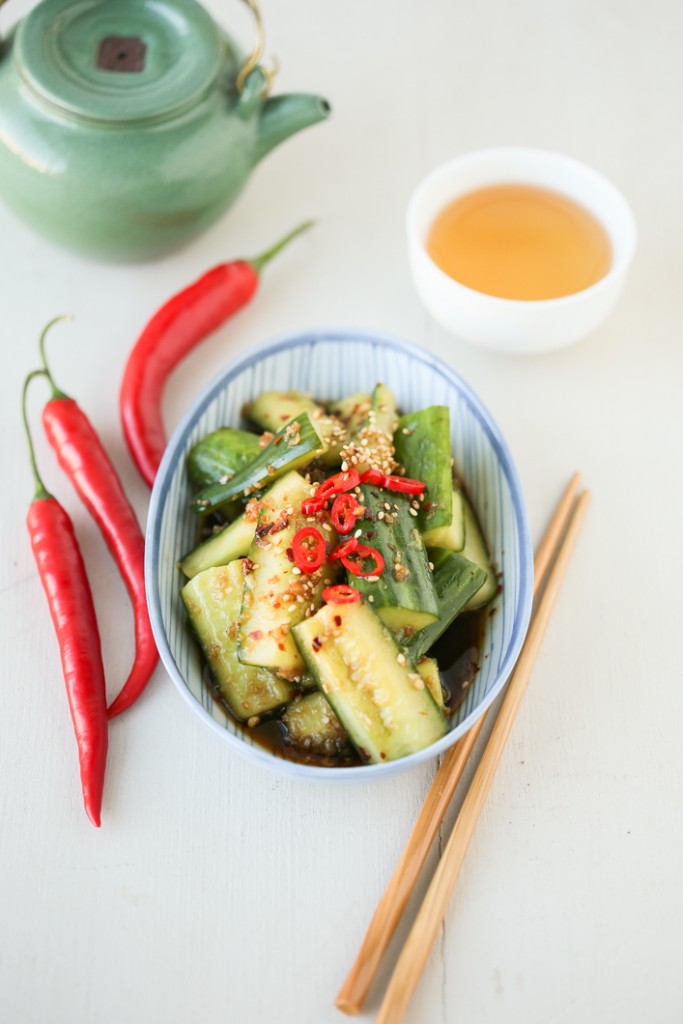 Tea snacks are often on the richer side, but I’m happy to say that these Chinese Smashed Cucumbers are the exception. These are delicious when served with hot Chinese green or Pu-erh tea. I especially love eating these with Misty Peak’s Raw Pu-erh–the gently sweet and vegetal taste of this tea calms the palette and leaves you wanting more of the veggies. Crunch, sip, crunch, repeat!

1. Cut the cucumber into 2″ pieces lengthwise, then cut each cylinder-like stump into 4 equal lengthwise pieces. Smash the pieces, one by one, under the flat side of the Chinese cleaver, the way you would smash garlic cloves under a knife.

2. Place the smashed cucumber pieces in a strainer, then evenly distribute a 1/2 tsp of salt over the cucumbers. Let this sit for a 1/2 hour at room temperature to allow excess moisture to come off of the pieces.

3. Mix all the dressing ingredients together in a small bowl, until everything is combined and dissolved. Set aside.

4. Shake any excess water off from the cucumbers, then place them in a bowl. Pour the dressing atop and evenly combine. Scatter sesame seeds, cilantro, or chili flakes/sliced chillies atop, then serve immediately. You can also chill the marinated cucumbers for several hours before serving, then garnish to serve.

The fun of making dumplings always involves a bit of crafty handwork, especially when it comes to those store-bought wrappers. It’s amazing how many ways you can fold a simple square or round of dough…kind of like food origami, which is perfect for people like me who love to play with their food! One... MORE >>

Candle season is officially here! With the days getting... MORE >>

For me, springtime officially marks the season when my... MORE >>