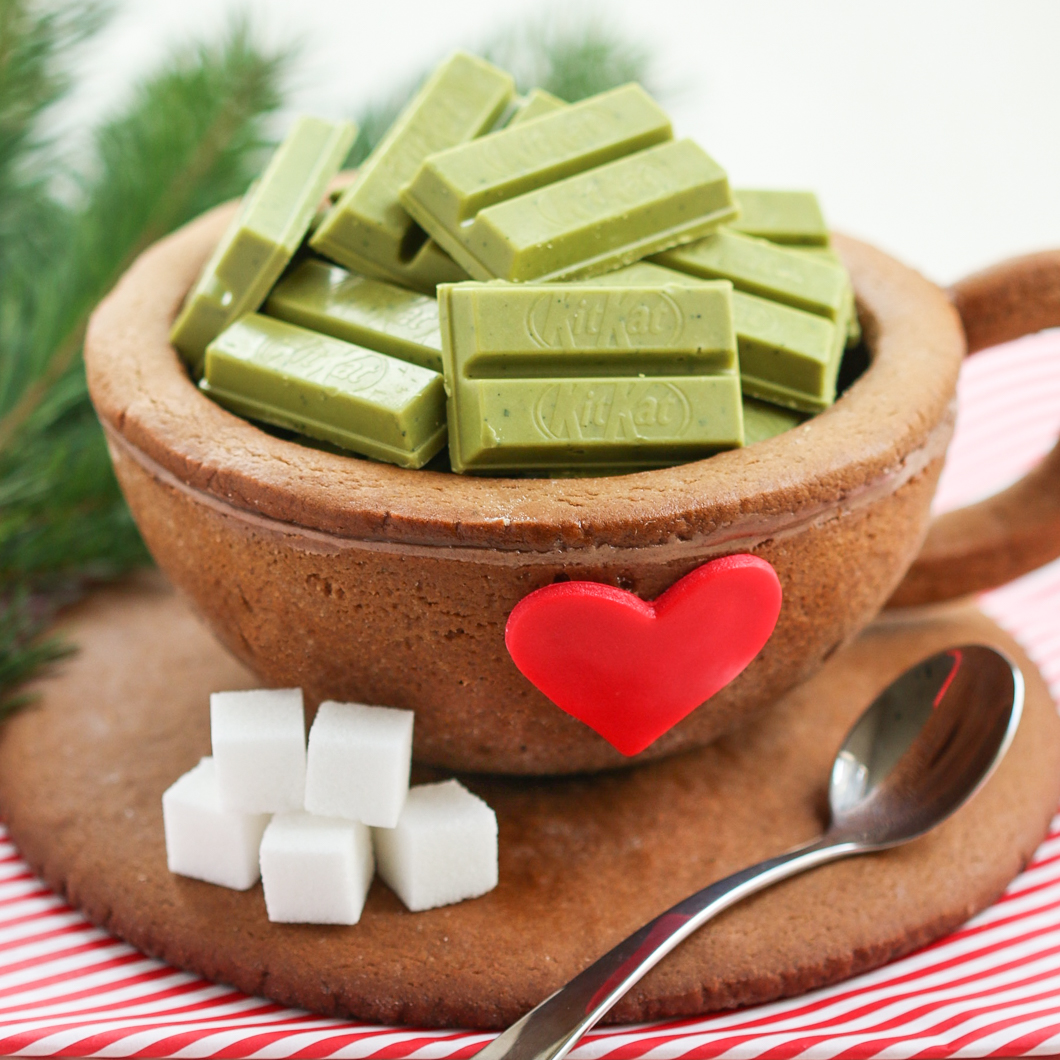 Just like that and Christmas is tomorrow! The last week has been so utterly hectic. Last minute trips to the mall, mad gift wrapping, and anxiously waiting for the UPS guy to show up with my deliveries has left me in serious need of a tea break. I’m sure you could use a break too, so here is my offering to you during this eventful holiday season: a Gingerbread Teacup–quaint and cozy–just in time for time for the big day tomorrow. 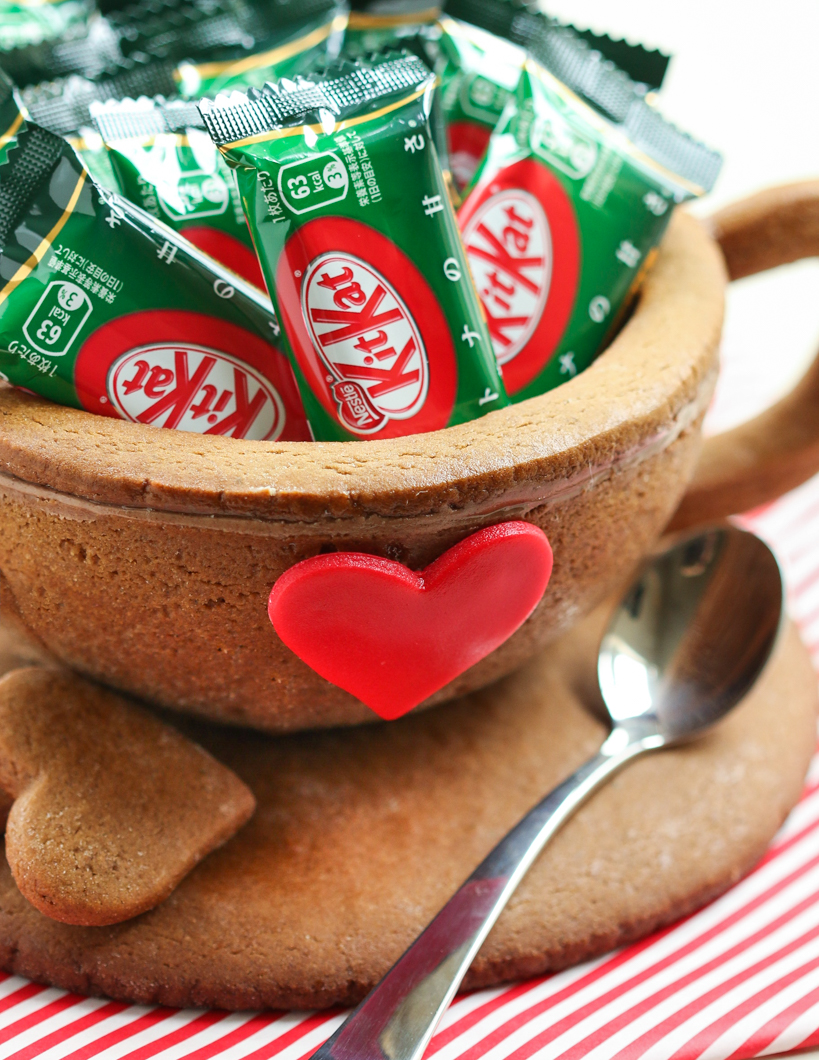 Last week I made a gingerbread house for my niece Maddy. With the spicy dough, I created heart-shaped windows, a deeply sloped roof, and a slender chimney that you could almost imagine smoke whispering out of. That’s the thing about gingerbread…it’s like playing with molding clay–ideal for those who like creating art out of food. The whole process got me thinking of how to shape gingerbread, especially since I’ve been meaning to finally put my brand new Sports Ball Pan Set to use. Sports ball? We can do better than that! 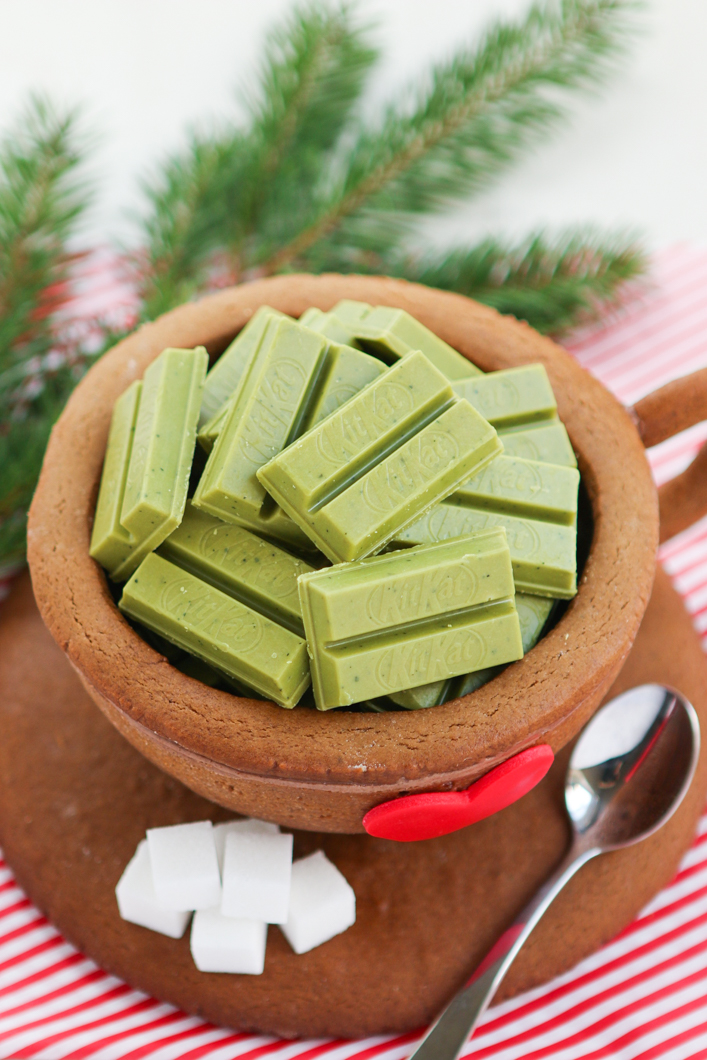 What’s great about the Sports Ball Pan is that it’s divided into 2 hemispheres, the perfect depth for a deep yet shallow teacup. To combat the gingerbread dough’s tendency to want head south while baking (because of the molasses and butter in the dough), I freeze the shaped tea cup dough before baking it. I also use the other empty hemisphere of the mold to compress the dough from the top to help create an even thickness along the lip of the cup. For maximum versatility, it’s also important to use a dough recipe that can tolerate some cutting with a serrated knife after being baked. 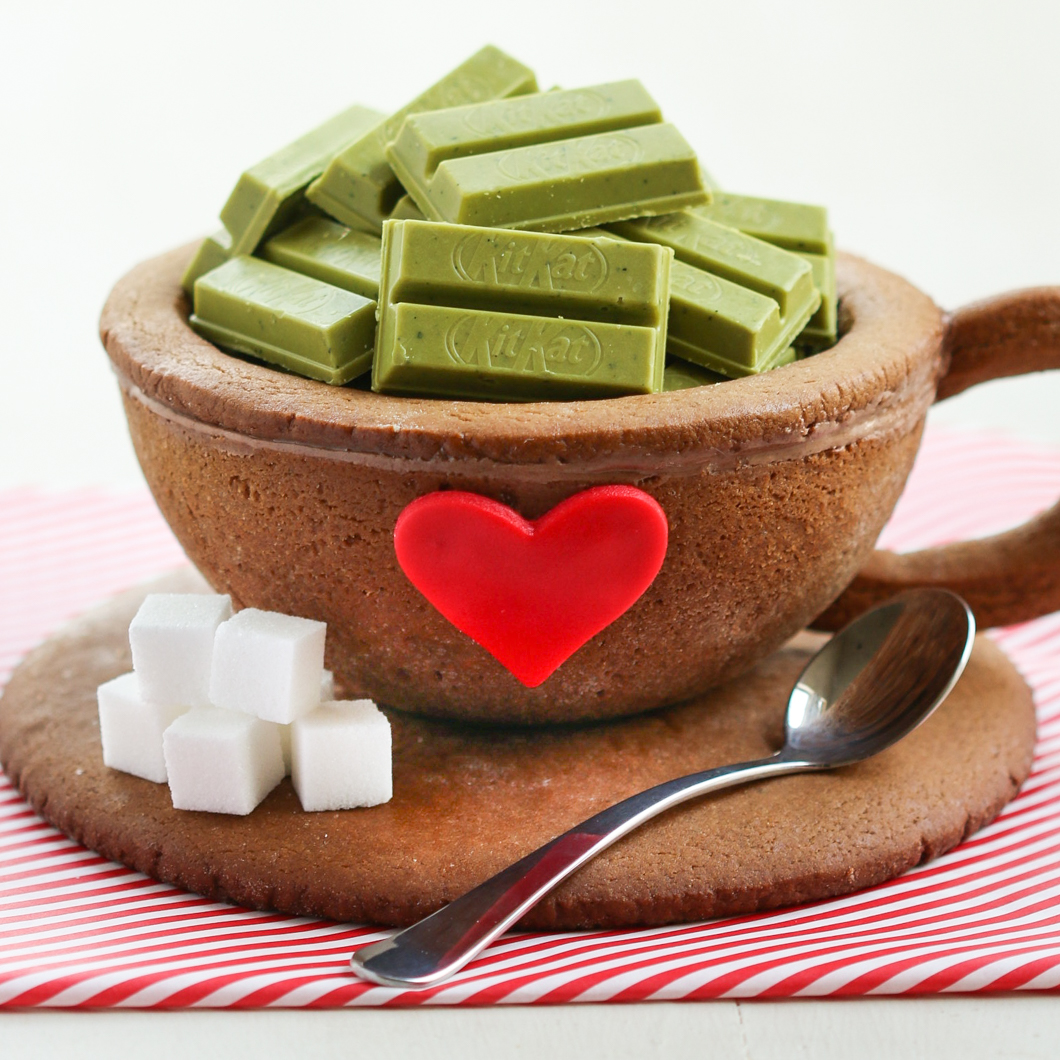 After baking off the tea cup piece, you’ll notice that the inside bottom of the teacup is thicker than the sides. This is simply a result of gravity doing its work during baking, so don’t worry! The cup is designed to be filled with lots of small edible goodies, so a thicker base means a sturdier base.

I’ve also tinted my royal icing with cocoa powder and cinnamon so that it looks like the color of the dough itself. This isn’t typical in gingerbread house making, but a good idea here since we want the tea cup pieces to come together to look continuous and smooth. The cocoa colored icing is used to attach the rim of the tea cup, which is simply made from creating a ring of gingerbread dough based on the diameter of the sphere. 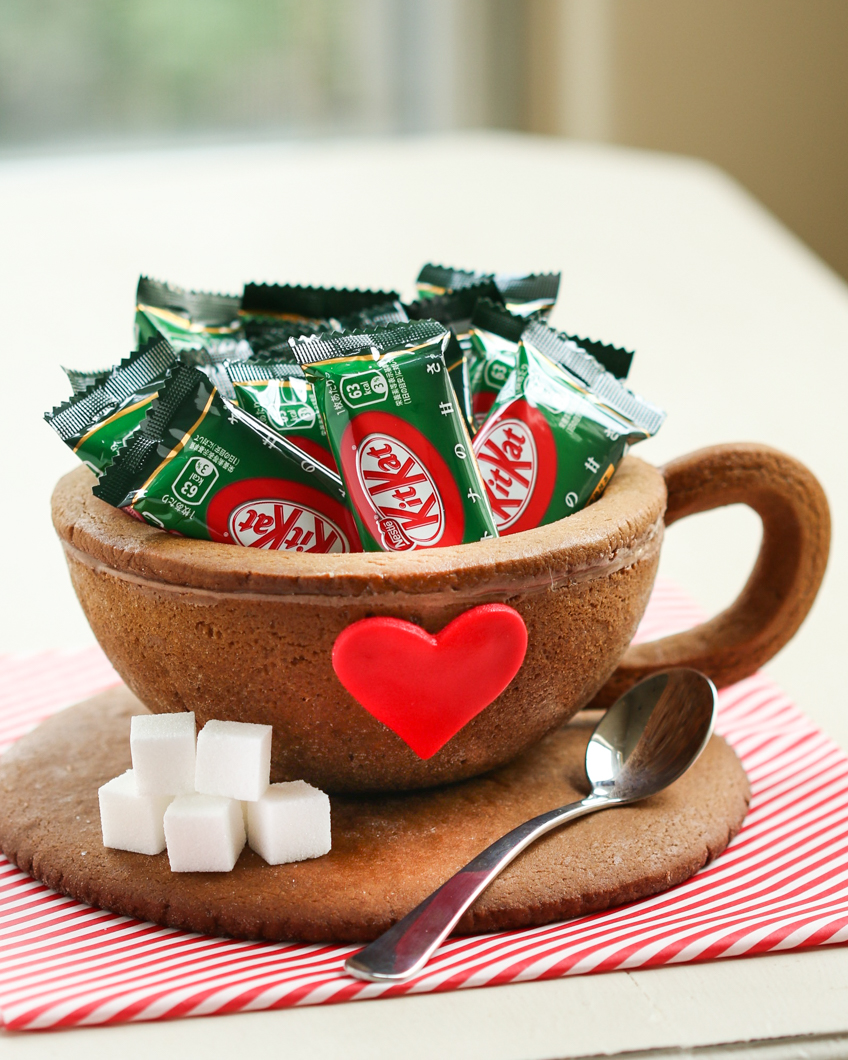 My sweet friend Danielle from This PictureBook Life bought me some yummy little Green Tea Kit Kats when she stopped over at Hello Kitty Con in Little Tokyo, so I thought this would be the perfect time to use (and eat!) them. You could certainly make your own tea-infused treats like Homemade Green Tea Pocky or Lemon Matcha Cake Bites, but if you’ve already made the cup, you should probably take a break now.

Truffles, biscuits, or even a pile of individually wrapped tea bags will steal the show in this homey little cup. Gingerbread Tea Cups: drink the tea, eat the cups! I’ll be taking this treat display over to my UK blogger friend Justine’s site for her Special Christmas Tea Time this week–you should come too! And with this post, I’d like to wish you a very Merry Christmas and send out a big thank you for following me along on my tea adventures this year! Happy Holidays everyone!!

7″ plate or other circle to use as template

1.)  Make the Gingerbread Dough. Cream butter and sugar together in the bowl of stand mixer on low. Meanwhile mix the cinnamon, ground ginger, cloves, baking soda, salt, and flour together in a large bowl. Add eggs, one at a time, to the creamed butter, mixing thoroughly after each addition. Use a rubber spatula to scrape down the sides of the bowl, then add the fresh ground ginger, vanilla, and molasses and continue to mix on low. Gradually add the spiced flour to the creamed butter until the dough is thoroughly mixed together. Place the dough on a large piece of plastic wrap, slightly flatten and seal tightly, then place the dough in the fridge to chill for at least 2 hours before rolling.

2.)  Shape the Teacup. After the dough has chilled, divide it in half, then roll one piece of the dough out to 1/8″ thickness with a rolling-pin on a large work surface generously dusted with flour (leave the other half covered in plastic wrap in the fridge). Roughly cut out a 10″ circle, then gently lay this piece of dough into one half of the ball baking pan (the hemisphere with the inner surface greased). Fit the dough into the pan as if you were laying pie crust into a pie plate, making sure the dough fits snugly and evenly against the ball pan. If there are tears, carefully patch them with scraps of dough. Trim off excess dough laying over the edge of the pan with a sharp knife. Place the mold fitted with the dough into the freezer to freeze until solid.

3.)  Create a Handle. Cut out a 1/2″ by 5″ strip of dough from the rolled dough. Shape it into the shape of a half heart, then place it on a large baking sheet.

4.)  Create a Tea Cup Rim. Cut out a 6″ round (using the empty hemisphere), then cut out a 5 1/2″ circle inside of the dough cut-out, creating round ring. Carefully transfer this dough ring to the baking sheet.

5.)  Create a Plate. On the rest of the rolled dough (or scraps re-rolled to 1/8″ thickness), place a 7″ plate. Cut around the plate with a sharp knife to create a gingerbread plate. Transfer this 7″ round of dough also to the large baking sheet. Lightly press the bottom of one of the ball molds into the center of the round to create a “ditch” for the teacup to sit in later. Place this plate also on the baking sheet.

6.)  Bake Cup, Handle, Rim, and Plate. Pre heat oven to 375 degrees F. When the oven comes to temperature, Place the dough teacup into the oven, with the other greased half of the mold (the empty hemisphere, greased on the outside) pressed snugly against the top surface of shaped dough. This will help the dough to create stronger “sides” on the teacup. Bake the shaped teacup dough for about 15 minutes, then remove the top pan and bake for an extra 12-15 minutes until the gingerbread is slightly puffed and stiff to the touch. Bake the handle, teacup rim, and plate for about 10 minutes until the handle is slightly puffed and stiff to touch, then remove the handle and continue cooking the teacup rim and plate until they are also finished baking. You may need to take the rim out at a different time than the plate so that the gingerbread doesn’t burn. Place any finished pieces of gingerbread on a cooling rack to cool. For the teacup, let it cool while it is still sitting in the ball pan. 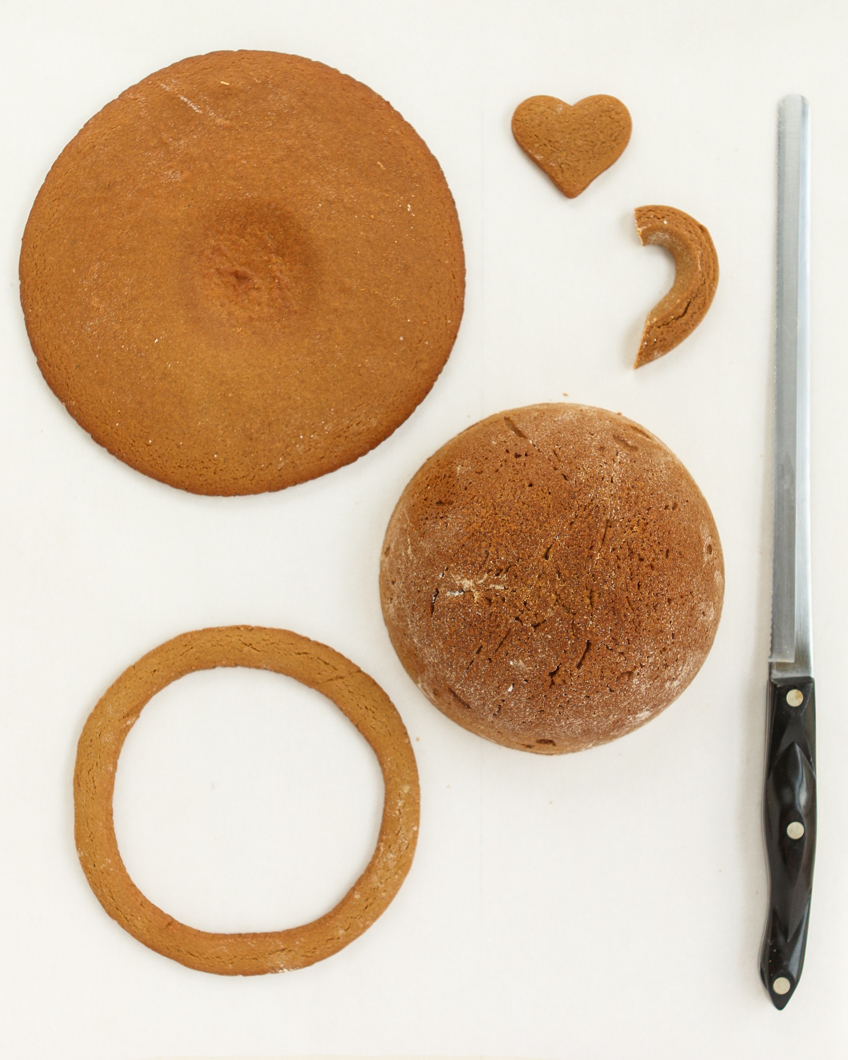 6.)  Trim the Gingerbread Tea Cup and Handle. When the gingerbread tea cup pieces have fully cooled, use a serrated knife to create clean, flat edges. For the tea cup, trim the jagged upper edge so that it lays flush against a flat surface when turned upside down. 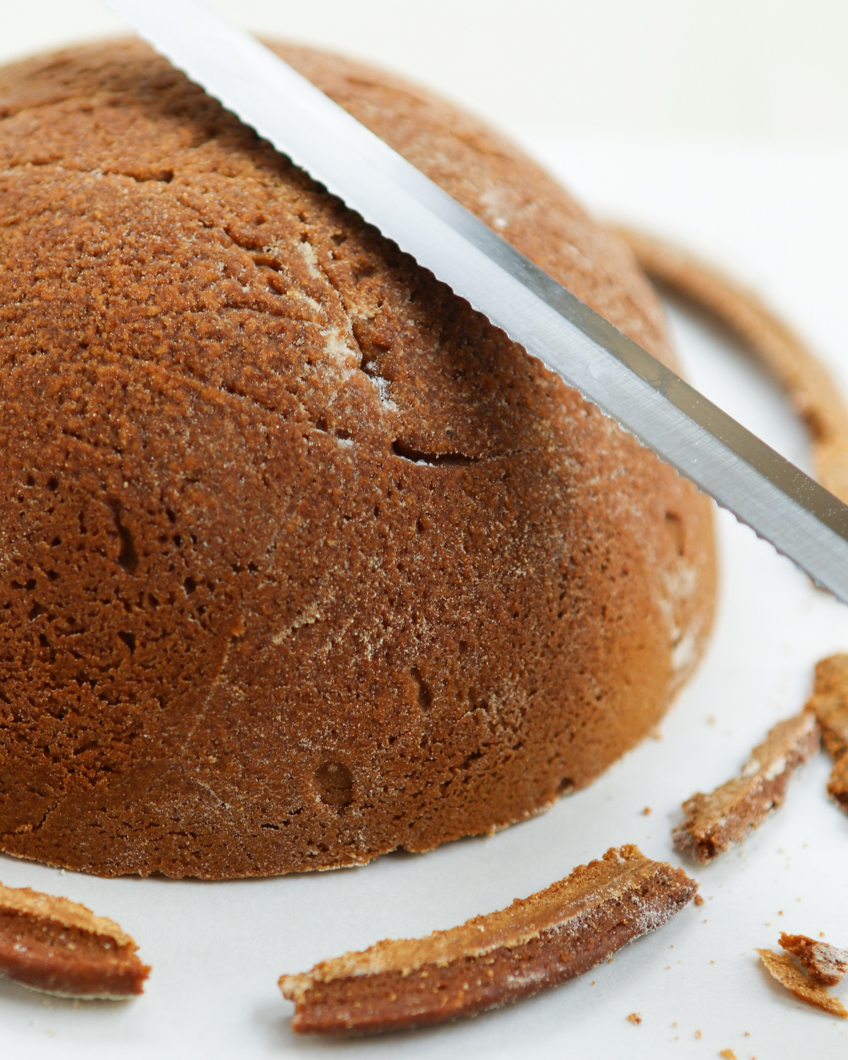 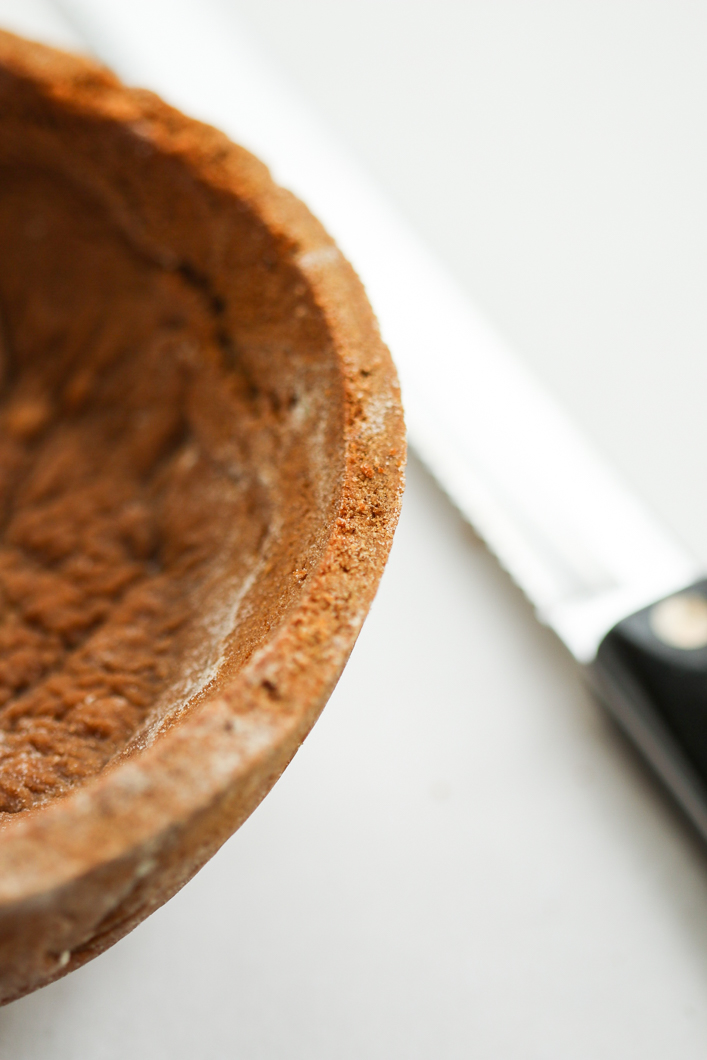 Trim the half heart-shaped handle to fit flush against the side of the teacup. It’s best to trim just a bit at a time as you see necessary. 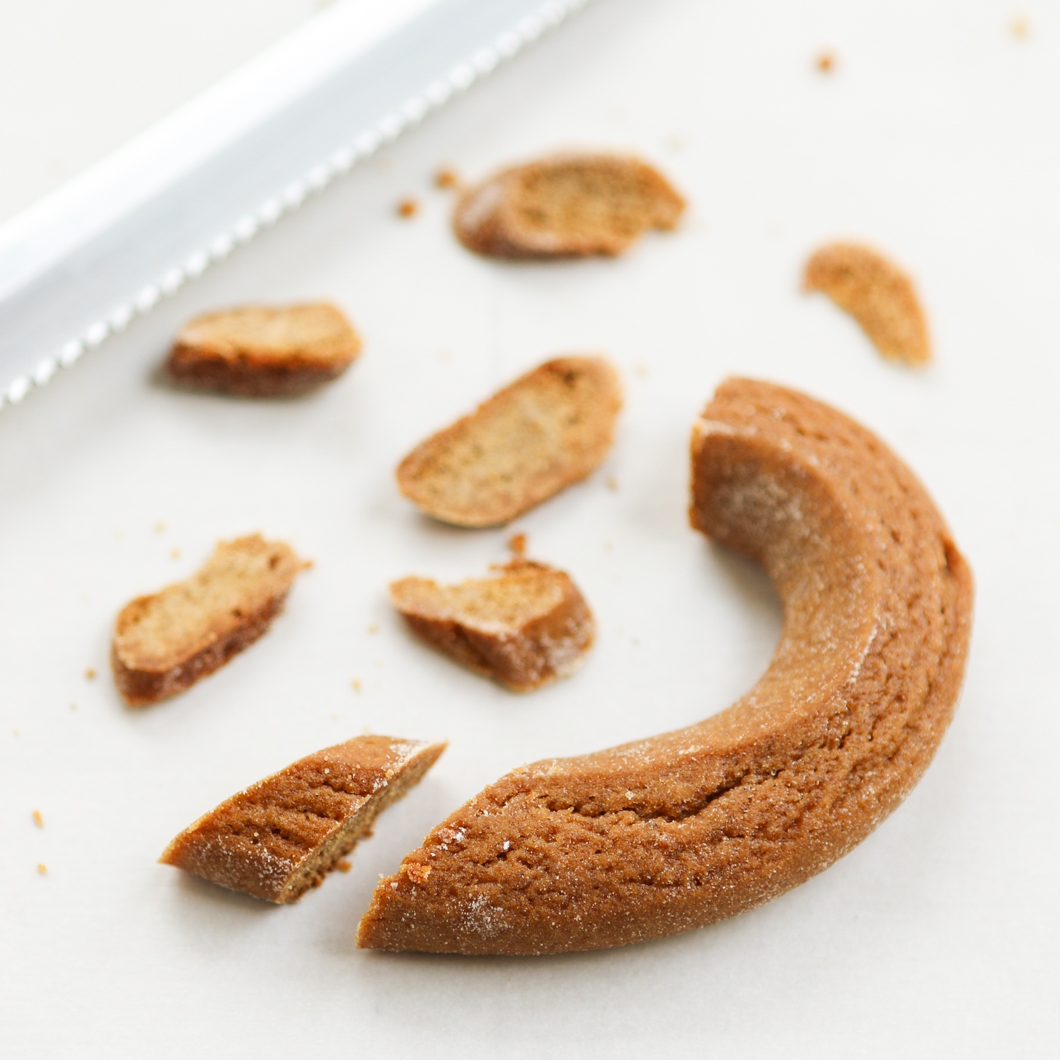 Repeat steps 2-6 to create a second set of teacup pieces.

7.)  Make the Royal Icing. Mix all the icing ingredients together in a medium bowl, then place the icing into the piping bag. Cut a small edge off from the bag’s tip, then use the royal icing to glue the handle to the teacup, and the teacup base to the plate. Also attach the tea cup rim to the top of the teacup, wiping off any excess icing with your finger to create a clean appearance.

8.)  Attach Tea Cup Embellishments. You can make small heart-shaped gingerbread cookies from re-rolled scraps. Also, you can roll out a small piece of red fondant and then cut it using a decorative cookie cutter, attaching it to the teacup with a dab of icing. Fill the teacup with cookies or candies. Sugar cubes and teaspoons also make charming finishes.

At Love Apple Farms in Santa Cruz this past weekend, I met one of my culinary idols, Andrea Nguyen. If you aren’t familiar, Andrea is the author of several Vietnamese cookbooks, including Into the Vietnamese Kitchen, Asian Dumplings (my favorite), and her most recent release, The Banh Mi Handbook. I’m always trying to improve my dumpling... MORE >>

A few days ago, outside my living room window,... MORE >>